Bryan Reviews ‘Pirates of the Caribbean: On Stranger Tides’!!! (A 3D Blu-Ray Review) 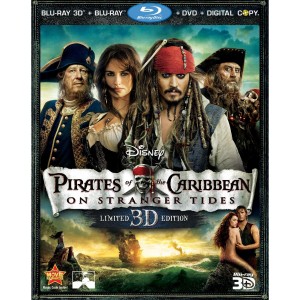 Now I’ll be honest.  I have only seen the first Pirates film and now I have seen the latest ‘On Stranger Tides’ film.  I didn’t care much for the first film.  I felt it dragged and was too boring. I know it had a huge budget and was full of adventure, but the adventure and action was less than stellar.  I know I’m the odd man out on this issue as I know tons of friends love this series of films and swear by it, but really never did much for me.  Saying that, I do think Johnny Depp is AMAZING in these films.  He definitely deserves an Oscar WIN.  Other than that and maybe the fact that Keith Richards has a little something to do with the films, I just can’t get into it.  Same rings true for this ‘On Stranger Tides’ sequel.  Yes, it had a bit more thrill and fun, but ultimately fell short.  I wish I felt differently.  I really want to like these movies, but sadly I can’t do it.

I’ll say this.  ‘Pirates of the Caribbean: On Stranger Tides’ has monsters, zombies, pirates, mermaids, Depp, Cruz, and McShane.  That sounds like the ultimate kick ass movie right?  WRONG.  How can a movie with all that cool stuff be so dull and ultimate leave me in a bored state.  It seems almost impossible.  But sadly it did.  Basically the plot of this 4th film is that Depp returns as Captain Jack and comes entangled with an old flame played by the beautiful and talented Penelope Cruz.  Captain Jack has his doubts about her and suspects that she is conning him to find the fountain of youth and Jack is forced aboard Blackbeard’s (Ian McShane) pirate ship.  Can Jack trust Cruz’s character Angelica or is she have other evil intentions?  I’ll leave you to find out.  The film looks great and has pretty stunning visuals.  The special FX are top notch and the acting is perfection.  But sadly the story just isn’t there and to be real honest, I don’t think it has ever been there. 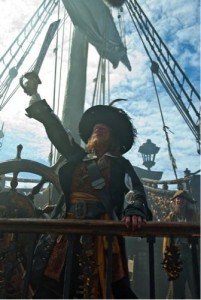 The video comes in 3D/2D Bluray versions.  It is encoded in 1080p and looks pretty crisp, but is not a full 100% awesome transfer.  The 3D looks pretty decent.  Some of the earlier scenes are a bit on the darker side and the fog in 3D is a bit strange, but everything is very clear, crisp, beautiful.  When the film comes on land is where the video truly glows.  The shading and color tones are remarkable.  The colors are very vibrant and are all above par toward the latter part of the film.  As far as the 3D goes, this film was made with 3D in mind, so it is one of the better 3D releases.  For you fans of 3D, this is a must own.  There are some cool moments that will pop out at you.  The 2D version is more consistent and does not have as many flaws as the 3D disc, but it does look great overall.  The audio boasts a lossless DTS-HD Master Audio 7.1 track that just tackles everything in its way.  The audio is perfect in every way possible.  Clear, crisp, stunning, and all my speakers got a full work out and then some.  Top notch sound on this. 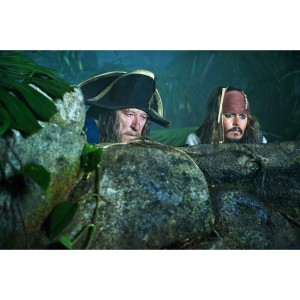 The movie is less than par, but the presentation and 3D is pretty top notch.   I’m sure there will be more Pirates films in the future since they make billions of dollars, but I can only hope for better story.  The extras are awesome, the sound is loud and perfect, and the video is surprisingly better than I thought.  If you are a fan of these films, then you will love this sequel and for fans of 3D, this is a must own.