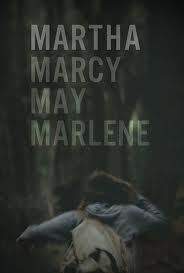 Martha Marcy May Marlene.  Behind this bizarre title, which will actually make sense later, is an equally bizarre film.  It’s a compelling depiction of a young woman (a wonderful Elizabeth Olsen) who escapes from a cult and attempts to integrate back into normal life.  The film from there on becomes an intense and surreal experience using familiar, though effective, cinematic techniques  and themes to gaze eerily into the world that this poor girl left behind, as well as her near impossible task of coping with returning to normal life.

The film itself is an unexpected, and I’m assuming intentional, travel into the surreal.  It is filled with gorgeous cinematography that captures serenity and chaos simultaneously, as we are taken into an experience where the quiet is as terrifying as it can be comforting.  A good portion of the film contains little to no soundtrack, which only added to the tension throughout.

This truly was an experiment in horror.  Though it does not attempt to give you and sudden scares, shocks, or gore, the film makes the viewer uncomfortable, asking you to relate to the un-relatable and try to understand how a mind can be warped into accepting as right and realty a way of life that can by no means be considered normal.

Conversely, the world we recognize as our own is equally strained to our protagonist.  Mostly because we face the reality of a brainwashed girl trying to understand what it’s like to live in a (presumably) unbrainwashed society.  Of course, she questions this existence as well.

I can’t really describe what the film does because I fear I’ll give something away, but the whole piece can best be described as a true artistic expression of an idea.  I don’t know if the minds behind the film meant to convey this, but what I saw can be summed up quite simply.  I saw the normalcy of insanity and the insanity of normalcy.  The chaos of peace and the simplicity of evil.

I’ll let you all judge for yourself, but I was quite impressed and was left with a feeling of extended breathlessness and a bit of dizzied confusion.