Bryan Reviews ‘Winnie The Pooh’ on Blu-ray!!! (A Blu-Ray Review) 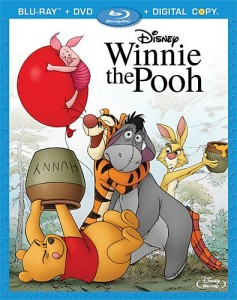 Disney has been doing such a great job recently releasing quite a bit of their back catalogue on 3D Blu-ray, and not to mention their Pixar films in 3D blu-ray.  But every once in a while they release one of their films that is a classic 2D animated film from my childhood.  In this case it is Winnie The Pooh in an all new 64 minute film.  This Winnie the Pooh film proves that even the simpler of films can still be some of the best out there.  I highly recommend this movie.

The film itself is simple enough.  Eeyore has lost his tail and everyone in the village tries to help Eeyore.  To Christopher Robin’s suggestion, there should be a contest to see who can come up with the best tail for Eeyore.  The prize?  A big pot of honey.  The next day, Pooh goes to visit Christopher Robin and he finds a note that says “Gon Out Bizy Back Soon”. Because Pooh is unable to read the note, he asks for Owl’s help. Owl’s poor reading comprehension skills lead Pooh and his friends to believe that Christopher Robin has been abducted by a ruthless and mischievous monster they call the “Backson”. Pooh and his friends plan to trap the Backson in a pit, which they think he’ll fall into after following a trail of items leading to it. Meanwhile, Tigger, wanting a sidekick to help him defeat the Backson, recruits Eeyore to be a second Tigger. He dresses up like the Backson and tries to teach Eeyore how to fight. Eeyore, who is doing this against his will, escapes from Tigger and hides underwater.  Later, Pooh visits Owl only to find that Owl was the one that took Eeyore’s tail, not realizing it belonged to Eeyore. Owl had been using Eeyore’s tail as a bell pulley for his door. Pooh chooses to leave and return the tail to Eeyore instead of sharing a pot of honey with Owl. Christopher Robin is proud of Pooh’s kindness and rewards him with a large pot of honey.  Stay tuned after the credits to get a glimsp of that mysterious “Backson” and see what he really is all about.  This movie was really terrific.  The music in it was amazing.  A lot of the original music was performed by the beautiful and fun actress, Zooey Deschanel and is just wonderful.  Pure awesomeness this movie is.

The beautiful 1080p transfer is just stunning.  This glorious hi-def transfer truly brings the 2d animation to life.  Everything is beautiful.  The colors blend and pop vibrantly and the backgrounds are just phenomenal.  In my opinion, this video is demo worthy.  Amazing.  The audio comes with an impressive DTS-HD 5.1 mix that just sounds magnificent.  THe dialogue is crystal clear and the score and songs boast on all speakers and just sounds radiant.  In the somewhat action sequences, the audio doesn’t roar like my favorite action movies, but it is still quite good. 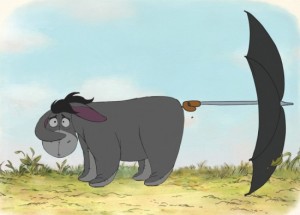 THE ULTIMATE WORD
This short little animated film is perfect at anytime in life.  It brings the joy out in any occasion and just let me feel free and happy without a care in the world for that hour it was on screen.  I highly recommend this film.  And this just proves time and time again that Winnie the Pooh is timeless and classic and great always for any age and generation.