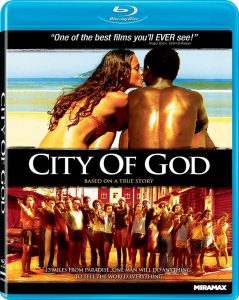 Nominated for four Academy Awards® (2003) — Best Director, Best Adapted Screenplay, Best Cinematography and Best Film Editing — and more than 50 other awards internationally, City of God is one of TIME Magazine’s “100 Greatest Movies of All-Time” and number 18 on IMDb.com’s “Top 250.” Directed by Fernando Mereilles and adapted from the novel by Paulo Lins (Orfeu), the story follows two young boys who grow up in a violent neighborhood in Rio de Janeiro, each of whom takes a different path in life. The Blu-ray Disc includes the documentary, “News from a Personal War.”

Spanning more than 20 years in Brazil, two boys grow up in the same violent neighborhood of Rio de Janeiro. Li’l Zé (Leandro Firmino, Cheating in Chains) owns the city and instills fear and violence in the community without mercy. Rocket (Alexandre Rodrigues, Forbidden to Forbid) only wants to pursue his passion for photography. But gang violence continues to rage in the City of God and the friends slowly get lost in themselves and their city.