The New ‘Conan the Barbarian’ Blu-Ray & 3D Blu-ray has been Announced and Detailed!!! 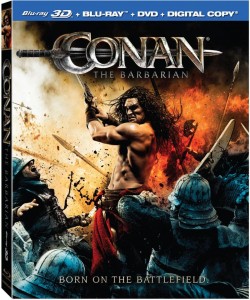 A home entertainment debut as fierce as the warrior himself, Lionsgate brings Conan the Barbarian to 3D/2D Blu-ray Disc, 2D Blu-ray Disc, DVD, Digital Download and On Demand this November. In an epic battle led by an epic hero, Jason Momoa (HBO’s “Game of Thrones”) stars as Conan, the Cimmerian set on avenging his father’s death. The action-packed film, directed by Marcus Nispel (Friday the 13th), also stars Rachel Nichols (Star Trek), Stephen Lang (Avatar), Rose McGowan (Planet Terror) and Ron Perlman (Hellboy). The 3D/2D Blu-ray Disc and DVD releases are both loaded with ferocious bonus materials that include two audio commentaries, a history of the Conan franchise featurette, “The Man Who Would Be Conan: Robert E. Howard” featurette that looks at the creator of the famous character plus two additional featurettes that examine the action and fight scenes.

Based on the character of Conan as originally created by Robert E. Howard, a boy born on the battlefield grows into a hulking warrior hell-bent on avenging his father’s death. But Conan’s personal vendetta soon escalates into an epic battle of impossible odds, facing the fiercest of rivals and the most horrific of monsters.

‘Conan the Barbarian’ will be avilable on 3D Blu-ray, 2D Blu-ray, DVD, and Digitally.