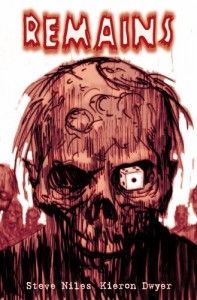 Disclaimer: I hate being scared. With a passion.

Chiller channel has decided that showing pre-made horror is not enough. They’re bringing us Steve Nile’s Remains, their first original movie, on December 16th. I’m so glad my roommate hates being scared as much as I do, or I might have had to find somewhere else to be that night.

Steve Nile’s Remains is the terrifying story of post-apocalyptic Reno and the survivors of an accident that turned most of the world into zombies (yep, staying away from this one). The survivors hide in a vacant casino and battle the hordes of aggressive, strong, smart undead. The movie will star Grant Bowler (True Blood), Lance Reddick (Lost), Miko Hughes (Pet Sematary), and Tawney Cypress (Heroes). The movie is based off of a graphic novel of the same name written by (you guessed it) Steve Niles, who also brought us 30 Days of Night.

But it doesn’t stop there. Along with their movie, Chiller is bringing us a couple of nice (I use the word sarcastically, FYI) documentaries. Future of Fear will air on November 25th and try to figure out exactly why we like horror (well, some of us). With commentary from such names as John Carpenter, Anne Rice, Wes Craven, and George Romero, Future will delve into the genre and sort out exactly where horror is going in the world.

To get you ready for the scares, on October 28th Chiller will host its second original special: Chiller 13: Horror’s Creepiest Kids. For 90 minutes, Chiller will count down the top scariest moments in film history and feature the most abominable anklebiters they can think of. Nolan Gould (Modern Family), Isabelle Fuhrman (Orphan), Steve Niles, and others will make up a panel to host the feature. Those of you who enjoy your terror will enjoy curling up in your dark house with a cup of cocoa before Halloween, slowly burrowing deeper and deeper as the sounds coming from your television sound like they’re coming closer. Have fun.

Chiller has been delivering 24/7 scares on television for years, from reality shows like Fear Factor to anthology series like Masters of Horror. They don’t show any signs of stopping, so if you like to jump out of your skin, it’s the channel for you.