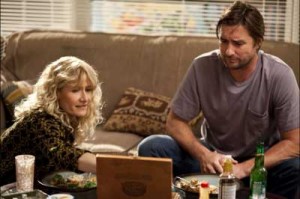 Amy Jellicoe, an ambitious executive at a global conglomerate, has been her own worst enemy for most of her adult life.  Her self-destructive choices, both at home and at work, have resulted in a very public, humiliating nervous breakdown.  After an extended stay at a treatment center in Hawaii, Amy returns to her fractured life, determined to lead a more enlightened existence.  But her newfound noble intentions only ratchet up the drama, wreaking unexpected havoc on those around her.

A unique blend of comedy and drama, the new HBO series ENLIGHTENED kicks off its ten-episode season MONDAY, OCT. 10 (9:30-10:05 p.m. ET/PT), exclusively on HBO.  Laura Dern (HBO’s “Recount”; Oscar® nominee for “Rambling Rose”) stars as Amy in the series, which she executive produces along with Mike White (“Year of the Dog”), who also co-stars, writes and directs.

After undergoing a traumatizing workplace setback, Amy Jellicoe begins questioning her role as a top-tier executive at her multinational corporation.  On a forced mental health retreat, she experiences a dramatic transformation that inspires her to adopt a new attitude in her private life and at her company.  But upon returning to the office, Amy discovers that her new enlightened outlook is unwelcome and even threatening to her co-workers and loved ones.

“There are so many anti-heroes populating TV series right now, I wanted to do a show about someone who is dysfunctional and far from perfect, but whose impulse is to do good and try to be the best person she can,” says Mike White.  “Amy is living a very ordinary life, but her relentless drive to make her world better makes her unique – and in a way, dangerous.  I also wanted to a write a show that was centered around a woman, but wasn’t a dating show.  Amy has a lot more on her mind than just her romantic life – and I hope people will find that relatable and refreshing.”

“Amy is a mass of contradictions, a woman of good impulses who often does the wrong thing, a woman who wants to make things better but sometimes produces the opposite result,” says Laura Dern.  “As she tries to decide what’s really important to her, she tries to live a deeply authentic life, but her passion and honesty often backfire, making her efforts to change herself and her world far more complicated.”

Following an on-the-job breakdown, Amy Jellicoe (Laura Darn), a corporate buyer, returns home from an extended stay in a holistic treatment center.  With a kinder-and-gentler attitude, Amy moves in with her mom, Helen (Diane Ladd), while making overtures to her company, Abaddonn Industries, to get her job back.  Meanwhile, she reconnects with her ex-husband, Levi (Luke Wilson), but a relaxing evening short-circuits when he reverts to his old ways.  The next morning, after reciting her new mantra – “I will change, and I will be an agent of change” – Amy returns to the office to start a new chapter in her life.  But will Abaddonn take her back?

Amy’s hopes of landing a dream job take a hit when she’s demoted to the basement of Abaddonn, working in data entry amongst a group of social misfits.  The job has its perks, however, as she uncovers a litany of corporate improprieties while surfing the net in her downtime.  Meanwhile, Amy’s attempts to improve the lives of her ex-husband Levi and mom Helen fall on deaf ears.

Jealous of Krista’s (Sarah Burns) good fortune and fed up with her humiliation at Abaddonn, Amy considers leaving the company for a socially responsible job at a homeless shelter.  But the low pay, combined with a huge unpaid bill from the treatment center, give her pause.

Wary of reverting to her old, hard-partying ways on her first weekend home, Amy talks Levi into taking a rafting excursion to the Kern River, which they frequented during happier times, when they were married.  The idyllic trip takes a downturn, however, when Amy discovers that her mission to implement change in Levi may be more difficult than she realized.

In addition to the HBO Films presentation “Recount,” for which she received an Emmy® nomination, Laura Dern’s HBO credits include the HBO original movie “Afterburn,” for which she won a Golden Globe and was also Emmy®-nominated.  Among her feature films are “Rambling Rose” (Oscar® nomination), “Smooth Talk,” “Jurassic Park,” “We Don’t Live Here Anymore,” “Little Fockers,” “Citizen Ruth,” “Fat Man and Little Boy” and the David Lynch films “Wild at Heart,” “Blue Velvet” and “Inland Empire.”

Laura Dern and Mike White previously worked together on the 2007 feature film “Year of the Dog,” which was written and directed by White, and co-starred Dern.

Mike White’s other writing credits range from the award-winning indie black comedies “Chuck & Buck” and “The Good Girl” to the mainstream comedy hits “School of Rock” and “Nacho Libre.”  His TV credits include the short-lived but critically-praised “Freaks and Geeks” and “Pasadena.”  Along with appearing in many of his films, White is known for twice competing in the Emmy®-winning series “The Amazing Race” with his father, Mel.

Mike White wrote the teleplay and directed the pilot of ENLIGHTENED from a story written by White and Laura Dern.  Miguel Arteta (“Cedar Rapids,” “The Good Girl”) and Edward Saxon (“The Silence of the Lambs,” “Adaptation”) serve as co-executive producers on the series; David Bernad and Jason Weinberg (“The Land of the Astronauts”) are producers.  The ten episodes are directed by Mike White (two episodes), Miguel Arteta (four episodes), Jonathan Demme (two episodes), Nicole Holofcener (one episode) and Phil Morrison (one episode).