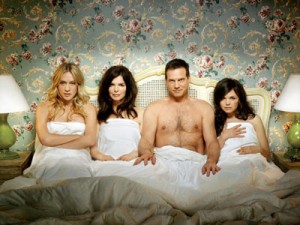 Over the course of its five seasons Big Love®, the multiple Emmy® and Golden Globe®-nominated series has combined provocative subject matter, outstanding writing and a talented cast — inspiring critical acclaim.  Now the iconic drama series is being released in one ultimate collector’s edition, day-and-date with the final season DVD, just in time for holiday gift-giving.  Big Love: The Complete Collection and Big Love: The Complete Fifth Season will be available in stores on December 6, 2011 for the suggested retail price of $199.99 and $59.99 respectively.

Big Love: The Complete Collection brings together the series’ uniquely crafted story arc about modern day polygamists Bill Henrickson, his three wives (Barb, Nicki and Margene), and nine children as they struggle to overcome the myriad of challenges brought about by their beliefs, lifestyle and Bill’s entrepreneurial and political ambitions.  The complete collection includes all 53 episodes from all five seasons, plus all of the extra features from the individual releases that offer additional insight into the Henrickson family dynamics.  Features include “Inside the Episodes,” “Their Stories So Far,” “Big Love: A Balancing Act on Ice,” “Big Love: End of Days,” three pre-quels, three mini-episodes and audio commentaries.

Big Love: The Complete Fifth Season brings the story of the Henrickson family to a close.  In the wake of Bill’s surprising election to the Utah State Senate and his public admission that he and his three wives are “stepping into the light” as polygamists, the family finds themselves dealing with the consequences of their decision.  Can they survive this flood of ill-will?  The DVD set includes new “Inside the Episodes” perspectives from the show creators and “Big Love: End of Days,” a look back on the series from the cast and crew.