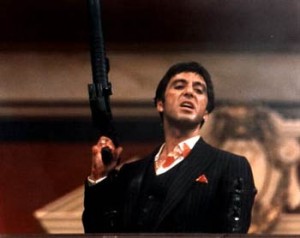 Universal is officially prepping another new version of ‘Scarface’.  The first film being from 1932 and then to the ever popular and iconic 1983 film with Al Pacino as Tony Montana.  The studio has been meeting writers to script a take for a film that will be produced by Marc Shmuger and his Global Produce banner along with Martin Bregman. Bregman produced the Pacino version.

This new film will not be a remake nor a sequel, but rather just a stand alone  film with the same basic themes as the previous two which is an outsider, an immigrant, barges his way into the criminal establishment in pursuit of a twisted version of the American dream, becoming a kingpin through a campaign of ruthlessness and violent ambition.  The 1932 version has an Italian immigrant who tried to take over Chicago.  The Al Pacino 1983 version had Cuban refugee Tony Montana take over the cocaine business in Miami.  So far, the studio is keeping all the details under wraps on to the origin of Scarface.

I don’t think any version that will come out of ‘Scarface’ in the future will do as well or be as iconic as the Al Pacino 1983 Brian De Palma version.  That film is respected way too much.  To me personally, I think it is way overrated.  It is a good movie, but I just don’t see why it’s as popular as it is.  I will be sure to update you more when more info is released.