‘How To Make It In America’ Blu-Ray & DVD Announced and Detailed!!! 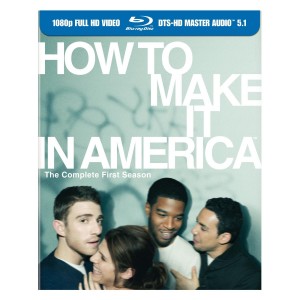 The HBO series ‘How To Make It In America’ has just been announced for Blu-Ray and DVD for a release date of September 27th.  With an appealing, hip young cast, How To Make It In America: The Complete First Season takes viewers on a high-energy ride with two enterprising twenty-somethings as they hustle their way through New York City’s competitive fashion scene determined to achieve the American Dream.

Called “likable and absorbing” (Time Magazine), “with…scenes so finely and yet sharply observed”(Wall Street Journal), this HBO® comedy series explores the fascinating bohemian subculture of the city’s downtown and finds out just what it takes to make it to the big time. Loaded with entertaining bonus features,both the 2-disc DVD and Blu-ray sets will be released on September 27, 2011, for the suggested retail price of $39.98 and $49.99 respectively.

After his failed skateboard-deck business goes bust, Ben (Bryan Greenberg, October Road) tries to be the next big thing on the runway.  Along with his friend and business partner Cam (Victor Rasuk,Lords of Dogtown), they use their street knowledge and connections to bring their ambitions to fruition.  With the help of Cam’s cousin Rene (Luis Guzman, Traffic), who is trying to market his own high-energy drink, and their well-connected friend Domingo (Scott “Kid Cudi” Mescudi, Grammy® nominated hip hop artist), the burgeoning entrepreneurs set out to make it big, encountering obstacles along the way that will require all their ingenuity to overcome.

Bonus content on the How To Make It In America: The Complete First Season DVD and BD sets include: