Disney’s ‘Zokkomon’ Is Quite Good!!! (A DVD Review) 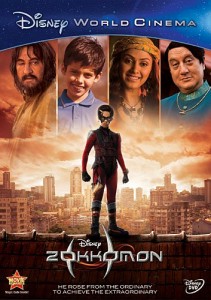 I really love that Disney is releasing films from around the world.  I think it is great that kids and adults alike will get the chance to see what movies are like from other far off countries.  One of those films is ‘Zokkomon’ which sounds like a Pokemon character but it is a Hindu film about the magic of being a hero.  It really came across very well and was delighted to watch it.

We first meet Kunal who is an orphaned kid who lies a positive life in a school he loves.  He has many friends and is an all around happy kid.  One day his Uncle Deshraj comes to visit him and we quickly learn that he is a sinister uncle and forces poor Kunal to leave his friends and school to come live with him in his village.  Upon arrival of the small village, Kunal sees that the village is a slum and that the school his Uncle runs is poor, dreadful, and full of corruption.  Deshraj is stealing money from the school and using it for his own personal gain.  Kunal realizes what his Uncle is doing and Deshraj is aware of Kenal’s curiosity, so Deshraj takes Kenal to the carnival for some fun one day.  Only to have Deshraj intentionally leave Kenal at the carnival and never return.  When Deshraj returns to his village, he tells everyone that Kenal died in a tragic accident.  This allows all of poor Kenal’s inheritance from his parents transfer to Deshraj, so that he may use it for his personal gain.  While abandoned and alone, Kenal comes across and meets Kittu, a fun loving artist who lives in a theatre.  Kittu looks after Kenal for a while and they begin to live life together.  Both Kenal and Kittu agree that it would be best if they both went back to Deshraj’s village and confront him about his evil doings, but as some tragic circumstances happen, Kittu and Kenal part ways, and Kenal journeys to the village alone.  Upon arriving, everyone in the village thinks he is ghost due to his uncle Deshraj telling everyone he died.  Shortly after Kenal arrives in the village, he befriends another person who has been hiding a ways from the village who is a supposed magician.  Kenal and his new magician friend join forces to take down the evil Deshraj and make the school and village a better place to live.  The both come up with ‘Zokkomon’ which is a fictional character for Kenal to play in front of the village people.  A super-hero of sorts.  From here on out, ‘Zokkomon’ tries to rid the town of evil by using the techniques his new friend teaches him with a bit of magic from the beyond.  It was really fun to watch and I have no doubt that kids will love this film. 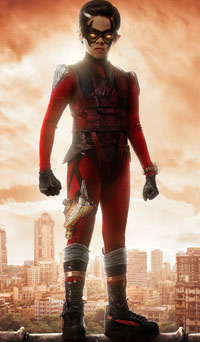 The video is presented in widescreen in 2.35:1.  It is not in hi-def either.  But overall the picture looks good being it’s on DVD and being a Bollywood film.  Some grain here and there and the colors are bright but they don’t pop.  The sound is a 5.1 Dolby Digital track.   It’s in hindu as well, but there are english subtitles, but only for the feature film.  The audio is mostly front speaker sounding with rare momnets of sound coming out of the rear speakers.  But the dialogue is crystal clear.  Needs a DTS track.

‘Zokkomon’ is overall a fun little film.  The kids will love it, and I think the adults will get something out of it too.  Now mind you this is Bollywood, so somethings may feel a little strange, but ‘Zokkomon’ is an entertaining film.  Wish there were extras to go on this, and I think this film would have been beautiful on blu-ray.  But I do recommend this.  Solid film for all ages.