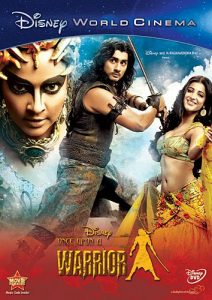 Again, how awesome is it that Disney is releasing foreign films in the sci-fi fantasy genre?  It’s kick-ass I tell you.  This film, ‘Once Upon a Warrior’ is pretty epic if I may say so.  First off the film is a little on the hardcore side and is over two hours long.  So you know there is definite story and character development in this film for kids.  The visuals are fantastic and the special FX are almost top notch.  I was surprised on how crazy cool this film was.

The film reminds me of a cross between ‘Lord of the Rings’, ‘Legend’, and ‘Dark Crystal’.  There are some pretty scary images in the film and some pretty fantastic action sequences.  I was really surprised by how much the film had going for it and how big the budget was. So basically the film is about an evil queen who loves to put the people of her land in pain.  She was born into a sorcerer’s family so she has magical powers.  So one day, she is basically arrested for her crimes and evil and killed.  But being the sorcerer her soul stays alive and is locked away into some kind of locket.  Meanwhile a descendant of the queen is a fun loving gypsy who is trying to make ends meet who ends meeting a guy on a mission.  The two begin to fall for each other.  Then one night some evil idiot who wants to cause trouble attacks the village that the gypsy lives in.  The Gypsy’s boyfriend monetarily stops the attack but the evil idiot gains momentum and ends up binding the gypsy’s boyfriend and setting fire to the entire village.  This breaks the curse of the evil queen’s soul when the locket touches fire and she becomes whole again.  Not to mention that the evil idiot stabs out the eyes of the gypsy’s boyfriend.  Now the evil queen will have her revenge and it is up to a few people to stop her.  From her on out, we meet several new characters who team up to stop the evil queen.  This is a pretty hardcore little Disney film.  I’m saying 10 and up mostly.  It was solid and very entertaining. 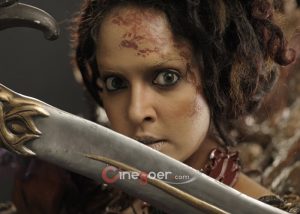 The video is presented in widescreen in 2.35:1.  It is not in hi-def either.  But overall the picture looks good being it’s on DVD and being a Bollywood film.  Some grain here and there and the colors are bright but they don’t pop.  The sound is a 5.1 Dolby Digital track.   It’s in Telugu as well, but there are english subtitles, but only for the feature film.  The audio sounds pretty great and the speakers get a workout for the most part. The dialogue is crystal clear.  Needs a DTS track.

‘Once Upon A Warrior’ surprised me on how epic and brutal it was at times.  It is a fun fantasy film that I think all ages will enjoy.  The music in the film is lacking but hey its Bollywood.  Overall, I do recommend seeing this film and the kids will just absolutely love it.  Glad I got to see this film.  A rare gem.