Beavis and Butt-Head Will Return This Fall With New Episodes On MTV!!! Check Out A Clip from the New Season!!! 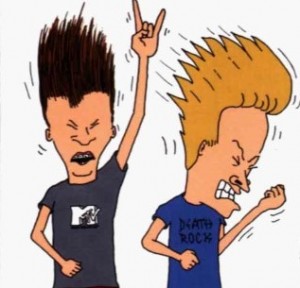 That’s right.  Beavis and Butt-Head will be returning to MTV this Fall with an all new season and fresh new episodes.  It has been over a decade since they last did a new show.  It looks like Mike Judge will still be doing the voices for the show.  The new season premieres on MTV on October 27th, 2011.  Check out the clip from the new season.  WOW.  Brings back memories!!

In 1993, Nirvana ruled the airwaves, Seinfeld was the king of prime time and Beavis and Butt-Head were born. Well, not really. But that was when creator Mike Judge and MTV knocked their heads together and launched an animated series starring a couple of lunkheads and unwittingly started a revolution.

Almost as soon as the two dimwitted teenagers wearing heavy-metal T-shirts reared their ugly heads (heh-heh) they became self-appointed arbiters of “cool.” And Beavis and Butt-Head loved stuff that was cool. But, for the most part, Beavis and Butt-Head spent their time just sitting on a couch making fun of MTV’s music video staples and talking about stuff that “sucks.” Apparently, a lot of stuff sucked back then.

Deliberately unintelligent and crude, Beavis and Butt-Head revolved around the high-schoolers’ discussions about TV, heavy-metal music, nachos and trying to “score” with chicks. Their conversations were usually peppered with phrases like “ass-munch,” “butt-hole” and “fart-knocker” that became part of the cultural lexicon, as well as uncontrollable giggling.

When Beavis and Butt-Head weren’t sitting on the couch, they’d try to pick up girls at the local convenience store, slack off at school or wreak havoc while working at a burger joint, where they’d often deep-fry body parts or dead mice for fun.

Blonde-haired Beavis, who typically wore the same blue Metallica shirt, was obsessed with fire and had an alter-ego named The Great Cornholio, who appeared when Beavis was hopped up on too much caffeine and sugar. As Cornholio, Beavis would pull his T-shirt up over the back of his head and run around yelling in a Spanish accent: “I am The Great Cornholio! I need T.P. for my bunghole! Are you threatening me?”

Butt-Head had brown hair, braces and was always seen in a grey AC/DC shirt. His favorite word was “uhhh,” which was often followed by inexplicable chuckles. Butt-Head often insulted Beavis, although Beavis usually didn’t understand the put-downs and would wind up unknowingly making fun of himself.

In 1996, the duo appeared on the silver screen in Beavis and Butt-Head Do America. After the show ended its MTV run the following year, creator Mike Judge went on to make the long-running animated Fox series King of the Hill. That same year, MTV began airing Daria, a spin-off based on Beavis and Butt-Head’s dry-witted classmate.

Beavis and Butt-Head made appearances on the MTV Video Music Awards, the Academy Awards and Celebrity Deathmatch, and the show continued to be parodied and referenced on everything from Saturday Night Live to The Simpsons.

Beavis and Butt-Head may have deserted the couch back when flannel was still a cool fashion statement, but there will always be a soft spot — and maybe even some nachos — for them on MTV.com.