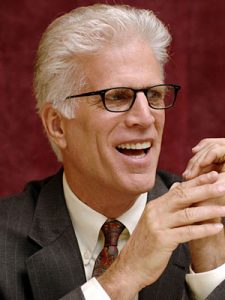 Two weeks ago, talks started with Ted Danson for him to take on the team leader and lead role on the original ‘CSI’ series for CBS.  Things must have gone well because now Ted Danson will star in ‘CSI’.  He will replace the role Laurence Fishburne recently had.  Danson has proved he is one hell of a likable actor and fun to watch on screen.  His work was amazing on FX’s ‘Damages’, and his work on HBO’s ‘Bored To Death’ is some of my favorite tv watching in recent memory.  I just hope he plans to have the same amount of air time on ‘Bored To Death’.  It seems like he will.  Enjoy the press release below.

LOS ANGELES – July 12, 2011 — Multiple Emmy Award winner Ted Danson will join the cast of CSI: CRIME SCENE INVESTIGATION, in a series regular role, on the CBS Television Network.  His character will debut in the season premiere on Wednesday, September 21 (10:00-11:00 PM,ET/PT). Danson will play the new CSI Supervisor for the grave shift after heading the crime lab in Portland. He comes to the team as they are still grappling with the professional and personal fallout from last season’s take-down of serial killer, Nate Haskell. “You can create a new character on the page, but until the perfect actor comes along and breathes life into it, it’s just words,” said Executive Producer Carol Mendelsohn. “We’re very excited Ted Danson came along.”

“From the moment we all started talking about therole, it was clear he couldn’t be more perfect,” said Executive Producer Don McGill.  “Intelligence, wit, warmth, depth of characterand emotion, he brings it all. And now he’ll have to bring latex gloves, too.”

Ted Danson will remain a series regular on the critically acclaimed HBO series,“Bored to Death.” He has also recently garnered accolades for his roles on “Damages” and “Curb Your Enthusiasm.” Ted Danson will next be seen starring opposite Drew Barrymore and John Krasinsky in “Everybody Loves Whales” to be released in January 2012.