Shirtz Takes A Look At the ‘Rango’ Blu-Ray While Joining A Certain Club!!! (A Review) 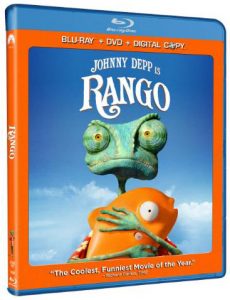 Shirtz took a vacation from his dealings with the underworld for a while and mingled amongst the humans to watch ‘Rango’.  It seems he was pretty smitten with the film.  That’s saying a lot from Shirtz.  I always look forward to his reviews.  Not only do you get his opinion on film, but you get a smidge of his seedy life story.  Long live Shirtz.  Enjoy the ‘Rango’ review.

a review by Jay Shirtz

“The captain has turned off the the seatbelt sign.  You are now free to move about the cabin.”

The intercom’s permissive announcement gives the flight attendant time to reevaluate what she heard.  It’s still not adding up, so she slightly tilts her head and quietly says, “Excuse me?”

“Five rums.  A can of pineapple juice.  And a Coors light.”  I say as I hand her my bank card and place the tiny, black, plastic speakers into my ears.  “Do we have any peanuts?”

“No.”  I can read her lips but not hear her voice over the mariachi music in my ears.

“Bummer.”  I say as she hands me my order with a disapproving look on her face.

Ten or so yards away, attached to the ceiling above the isle the early ’90’s style monitor starts up our in-flight feature film, “Rango.”

Rango starts off by introducing us to the lead character, his imagination, and his inability  to find artistic satisfaction in the safe and well-taken-care-of aquarium existence.  As our chameleon hero tries to produce a play with his plastic imaginary friends for a non-present audience, he realizes that the essential flaw in his script is the lack of conflict for the hero role.  The role in which he has cast himself.  He explains, “What our story needs is ironic, unexpected event that will propel our hero into conflict!”

At that moment, a near traffic accident hurls Rango’s glass home to the boiling desert asphalt where it smashes into oblivion.  Thus sending our hero on his epic quest for justice, identity, fame, love, water, and the spirit of the west.

The fasten seat belt sign lights up and a rusty intercom voice tells us, “this is your captain speaking.  We are experiencing some pretty harsh turbulence.  We’re going to try climbing to 30,000 feet to get above this.  Please fasten your seat belt and stay in your seat until such time as I can turn off the ‘fasten seat belt sign’.

I gulped down the last of my rum and pineapple, unbuckled my safety belt, pocketed the Coors light and stumbled rudely over my neighbor toward the isle.  “Sorry.  Sorry about that.  Nature, you know.”

My seat-mate, a tourist visiting San Francisco from Taiwan, did not speak English.  She smiled woundedly at my American intemperance and quietly prayed that I would not return from the lavatory.

As I sauntered down the isle, I caught the eye of my lady friend and travel companion.  Her slender frame was squeezed between two plus-sized women.  Sisters from Omaha on their way to Miami from San Francisco.  Neither one wanting the middle seat, they had decided to split themselves: one the window, one the isle.  Scaling in at a shared 520 lbs.  My lady friend squished between them.

As our eyes locked, I mouthed the words “Mile High Club?”

She retorted with a head tilt, and the squinting of eyes.  No sabe.

I repeated myself.  This time, perhaps a bit too loud as an older couple to my left began to giggle in their matching red Hawaiian shirts.  I looked over at them and they smiled approvingly up at me.  Clearly, they were sharing a memory from their younger days when they had attempted a similar maneuver.

I looked back to my lady friend and nodded mischievously.  Her eyes widened knowingly, and a smirk of a smile was born across her beautiful face.  She disregarded the captain’s instructions and joined me in the tail-end restroom facilities…

… We missed the rest of “Rango”.  I’m sure you understand.  Priorities being what they are.

Landing in Dallas, we stopped by our local video store:  “Premier Video”.

The Blu-Ray “extended version” of “Rango” was superb!  It is a true western.  A tribute to the American west and the traditions that we have been given by the greats!  Plus it has a weird “acid trip” feeling third act.  Not to mention, the best “from the grave” cameo in the history of western animation films.