Arnold Schwarzenegger Officially Books His First Film Since The Scandal!!! 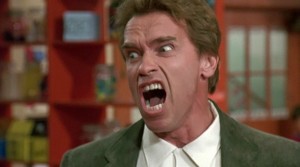 Since his last day as Governor of California and the most recent scandal, Arnold has been lying low with all of his projects on hold for the time being while his divorce is being finalized.  Well Lionsgate just announced that Arnold has booked return to the silver screen with ‘Last Stand’ in which Arnold will play a sheriff.  Lionsgate execs said: “It’s more of a Fast And Furious at the border with high speed car chases, drug cartels and the like.”  Read the press release below.

Santa Monica, CA, July 12, 2011– LIONSGATE today announced that Arnold Schwarzenegger will be making his return to film in THE LAST STAND, which the company is developing as a starring vehicle for the former California Governor. The announcement was made by the President of Lionsgate’s Motion Picture Group Joe Drake, and President of Production Michael Paseornek.

Korean action-suspense master Kim Jee-Woon (A TALE OF TWO SISTERS, THE GOOD, THE BAD, THE WEIRD) will direct the film, which is to be based on a spec script by Andrew Knauer that was subsequently rewritten by Jeffrey Nachmanoff. Lionsgate has domestic and international distribution rights, with the film having pre-sold well in several overseas territories already. Lorenzo di Bonaventura will be producing the film through di Bonaventura Pictures.

Schwarzenegger will be starring as Sheriff Owens, a man who has resigned himself to a life of fighting what little crime takes place in sleepy border town Sommerton Junction after leaving his LAPD post following a bungled operation that left him wracked with failure and defeat after his partner was crippled. After a spectacular escape from an FBI prisoner convoy, the most notorious, wanted drug kingpin in the hemisphere is hurtling toward the border at 200 mph in a specially outfitted car with a hostage and a fierce army of gang members. He is headed, it turns out, straight for Summerton Junction, where the whole of U.S. law enforcement will have their last opportunity to make a stand and intercept him before he slips across the border forever. At first reluctant to become involved, and then counted out because of the perceived ineptitude of his small town force, Owens ultimately accepts responsibility for one of the most daring face offs in cinema history.

“Arnold Schwarzenegger will bring incredible magnetism to this complex but classic role,” explained Drake of the perfect fit between the material and the star. “When he came on the screen in THE EXPENDABLES, it always electrified the audience. In this film, the Sheriff Owens character grapples with some really tough stuff, but ultimately triumphs, and we knew he’d truly elevate this high octane ride.”

The deal was negotiated for Lionsgate by Motion Picture Group Senior Exec VP Rob McEntegart. Schwarzenegger is represented by CAA, who negotiated the deal on his behalf along with attorneys Jake Bloom and Patrick Knapp of Bloom Hergott et al., LLP. Jee-Woon is also represented by CAA.