Classic Waxxx: Johnny Cash “All Aboard The Blue Train” 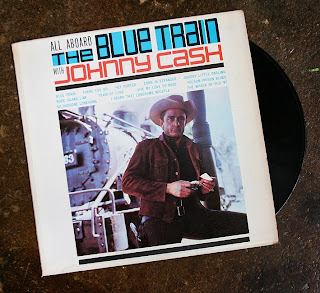 The summer months are quickly approaching the horizon like the fury of black iron and steel. Soon, it’ll be hotter outside than hell and the all of the coal that powers the engines on the Santa Fe line.

Summer is that time of year where most people, like myself, are desperately wanting to travel and be mobile for a little while. We want to escape the confines of office deadlines and see the world from the vantage point of a moving car or fast aero plane. For the folks of Johnny Cash’s time, they may still dream of seeing things from the opening of a big box car, traveling East and West on the Rock Island Line or the Union Pacific Railroad. Sadly, for most of us that era of American life has whizzed on by, but the songs collected on “All Aboard The Blue Train” sure does the job of getting us to a time in our minds where we wish to ride the open rails.

Sam Philips and Sun Records heard the requests of devoted Cash fans everywhere and collected all of his popular train and train related songs onto a single album, which saw release in 1962. All of the original recordings herein were recorded and produced between March 1955 and May 1958, covering 12 singles in all.

Cash celebrated his love of trains prominently during his tenure with Sun Records, and beyond, and maybe did it the best of all Country and Folk musicians to this day. Only Woody Guthrie and Jimmie Rogers (The Singing Brakeman) are the only two musicians that come to mind that bested Cash in this subject. 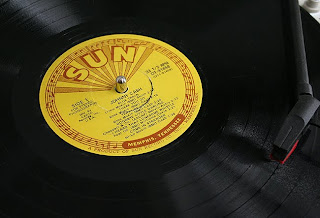 It’s fascinating to listen to these songs and discover how loneliness and heartbreak become synonymous with trains, either as a means of escape or relief, hidden within the confines of a catchy guitar hook or booming vocal delivery. Or, as in “Train Of Love” illustrates, the singer bares witness to travelers being greeted by their loved ones, yet inquires why his loved one hasn’t returned? The lure of the railroad is a mystery.

It should be noted, of the time of these recordings travel by train was still a common means of transportation, unlike today where automobiles rule. The tune “Goodbye Little Darling” tells the story of sending that special little lady off by train to a life that awaits elsewhere, again disguising the singer’s woe throughout a catchy, almost hymn-like arrangement.

Two of Cash’s most well-known train compositions  are “Rock Island Line” and karaoke favorite “Folsom Prison Blues”, two songs that are actually interspersed between lost love and loneliness. “Rock Island Line” is the story of a train conductor tricking the toll man from having to pay a toll on all of the ‘pig iron’ he’s hauling. It’s a great song with a rollicking guitar that builds and builds in speed, leading up to the often tongue-tying chorus. My only complaint about the song is it’s too short, coming in at barely over two minutes. A song this fun to sing along with should be at least double in length, or last as long as the train ride itself. 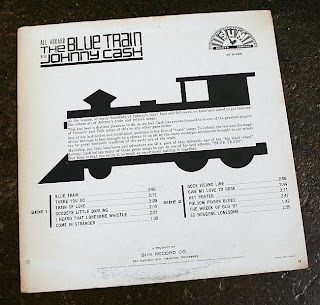 Cash was also clever in eliciting the notion of the train symbolizing freedom, as is illustrated in “Folsom Prison Blues.” A man stuck in prison doing time hears the train roll by and knows he’ll be behind bars until he dies, never again to enjoy the open free air or a puff of a cigar. On a side note, no other song in the history of music, dealing with trains or not, could have given us the line “I shot a man in Reno just to watch him die” better than Cash’s “Folsom Prison Blues”. This song gave birth to the cool outlaw cowboy for which every other country music outlaw would pattern themselves after (see cover art.)

In referring to the album art, the iconic image of a gun slinging cowboy about to roll his next cigarette, has and probably will forever be a subject of intrigue. As our love affair with trains and travel has grown exponentially over the many decades, so has our love for cowboys and outlaws. The two have gone hand-in-hand when relating to the freedom of movement, as well as the freedom to live. For my bottom dollar, it doesn’t get any better than Johnny Cash and his ‘train’ songs.

It’s rare a compilation album of any sort gets the kind of love and respect that “All Aboard The Blue Train” deserves. It’s a one-stop-shop for many of Cash’s best loved songs, and any record with “Folsom Prison Blues” isn’t shabby at all. The record certainly is an economical approach if you don’t feel like tracking down all of the original Sun singles individually.

Should you feel the tingle start to build up in your arms and legs, and you are ready to ride the rails or even head off to the next town over to grandmother’s house for the summer, put this record on your turntable just before you walk out the door. You’ll be amazed just how inspiring this collection of songs is, and be even more surprised just how far it will take you.

ALBUM NOTES | All Aboard The Blue Train