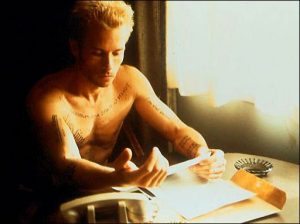 So for a while now, we have been getting bits and pieces of information on Ridley Scott’s return to his “Alien” franchise, “Prometheus”.  Well it looks like actor Guy Pearce (Memento) has been added to the amazing cast that has already been formed according to IndieWire’s The Playlist.

The cast so far includes: Guy Pearce, Charlize Theron, Michael Fassbender, Noomi Rapace, Idris Elba, Sean Harris, Kate Dickie, Rafe Spall, and Logan Marshall-Green.  So it seems like Ridley has got a pretty excellent cast with really no huge A-List stars besides Charlize.  Much like the original “Alien”, there was basically a no-name, no mega star actor.  They all got very popular after the first Alien film.  It seems Ridley is doing the same here minus Theron.  You won’t see Christian Bale or Bruce Willis in this film.

I want to be very excited for this.  But most times when a prequel is made a couple of dozen years after the original, it doesn’t turn out to be very good.  I am hoping differently on this one since the Alien franchise has had a huge impact on my life.  So far everything looks great.