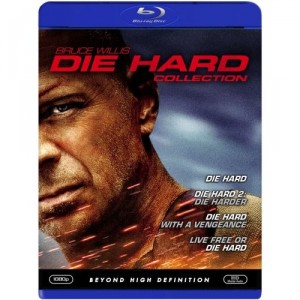 The 1st part of today’s Geek Deals comes in the form of DIE HARD.  Get all four Die Hard films in HI-DEF on bluray.  The best part is you get the entire set for only $20.49.  That’s like $5 a film.  AMAZING.  Makes you want to say “Yippe Ki Yay MotherF*cker!!!

“Die Hard is the movie franchise that made a movie star out of TV star Bruce Willis, and created an entire action-movie genre of its own. In the original 1988 film, Willis plays wisecracking New York cop John McClane, who arrives at the Nakatomi Plaza in Los Angeles to meet up with his estranged wife, Holly (Bonny Bedelia), at her office Christmas party. As luck would have it, the company ends up in the middle of a terrorist plot led by Hans Gruber (Alan Rickman) and his gang of expert killers, and with little help coming from outside, McClane has to pick off his enemies one by one. Thus was born the “Die Hard genre,” epitomized by such films as Under Siege (“Die Hard on a ship”), Passenger 57 (“Die Hard on a plane”), Speed (“Die Hard on a bus”), and Cliffhanger (“Die Hard on a mountain”). But few measure up to the explosive brilliance of Die Hard. Director John McTiernan develops the action at a fast and furious pace, culminating in some fantastic set-pieces on the top of the building, in the elevator shaft, and in the building’s outer plaza. Jeb Stuart and Steven E. de Souza’s script, based on Roderick Thorp’s novel Nothing Lasts Forever, is smart, funny, and full of memorable lines (among them “Welcome to the party, pal!” and of course “Yippee ki-ay, motherf*****”), and the cast is perfection, especially Rickman as the cunningly evil villain, and Willis, whose McClane character–bloodied, beaten, bruised, and barely breathing, as he battles both bad guys and bureaucrats–is someone audiences could genuinely cheer for.

Directed by Renny Harlin, the 1990 sequel, Die Hard 2 (unofficially referred to as Die Harder), doesn’t match the level of the original, but it’s still an exciting thrill ride with some terrific action sequences. One year after the Nakatomi incident, McClane (Willis) is awaiting his wife’s (Bedelia) plane to arrive at Dulles Airport when he stumbles onto a plot to paralyze the entire airport, including all the planes trying to land. It’s up to McClane to take on the cadre of bad guys despite all the bureaucrats standing in his way, and before the planes run out of fuel and crash to the ground. The cast includes William Sadler as rogue military man Col. Stuart, Dennis Franz as the latest bureaucratic cop to get in McClane’s way, Richard Thornburg as the annoying reporter from the original movie, John Amos as a special-forces commander, early-in-their-career John Leguizamo and Robert Patrick as terrorists, and future politician and Law and Order actor Fred Thompson as the head of air traffic control.

The third film in the series, Die Hard with a Vengeance (1995), was again directed by John McTiernan and uses a different concept. The villain (played by Jeremy Irons) claims to have planted bombs all over New York City and gives John McClane (Willis), now alchoholic and separated, a series of clues to try to track them down. Along the way, he’s aided by, and eventually teams up with, a Harlem shopkeeper named Zeus Carver (Samuel L. Jackson). The interplay between Willis and Jackson is engaging, but better suited to the Lethal Weaponfranchise it was previously considered for, and not till the end does the movie return to the familiar McClane-vs.-villains-showdown format.

Twelve years after Die Hard with a Vengeance, the third and previous film in the Die Hard franchise, Live Free or Die Hard finds John McClane (Bruce Willis) a few years older, not any happier, and just as kick-ass as ever. Right after he has a fight with his college-age daughter (Mary Elizabeth Winstead), a call comes in to pick up a hacker (Justin Long, a.k.a. the “Apple guy”) who might help the FBI learn something about a brief security blip in their systems. Now any Die Hard fan knows that this is when the assassins with foreign accents and high-powered weaponry show up, telling McClane that once again he’s stumbled into an assignment that’s anything but routine. Once that wreckage has cleared, it is revealed that the hacker is only one of many hackers who are being targeted for extermination after they helped set up a “fire sale,” a three-pronged cyberattack designed to bring down the entire country by crippling its transportation, finances, and utilities. That plan is now being put into action by a mysterious team (Timothy Olyphant, Deadwood, and Maggie Q, Mission: Impossible 3) that seems to be operating under the government’s noses.

Live Free or Die Hard uses some of the cat-and-mouse elements of Die Hard with a Vengeance along with some of the pick-’em-off-one-by-one elements of the now-classic original movie. And it’s the most consistently enjoyable installment of the franchise since the original, with eye-popping stunts (directed by Len Wiseman of the Underworld franchise), good humor, and Willis’s ability to toss off a quip while barely alive. There was some controversy over the film’s PG-13 rating–there might be less blood than usual, and McClane’s famous tag line is somewhat obscured–but there’s still has plenty of action and a high body count. Yippee-ki-ay! –David Horiuchi”

So take advantage of this offer.