Bob Dylan: All You Really Want For Hanukkah & Christmas 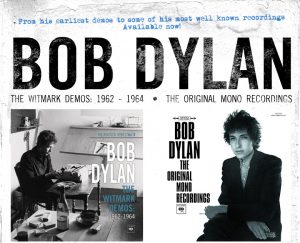 With all of the great music releases by legendary artists this holiday season, the two ‘must have’ collections this year for sure are from Bob Dylan.

First up, continuing with his ‘Bootleg Series’, collections of rare and unreleased recordings, Dylan’s latest is the “Bootleg Series Vol. 9: The Witmark Demos”, 47 tracks featuring an early 20s Dylan on guitar and vocals, with the occasional harmonica and piano to boot. Many of these recordings have not been commercially available until now, almost 50 years since their original recording sessions. The collection also includes an in-depth booklet with liner notes from music historian Colin Escott, and is available on 2CD or 4LP. You really hear Dylan like you’ve never heard him before, as well as these songs in their first incantations ever committed to tape. It certainly feels like hearing these recordings again for the very first time.

The other gem in this Dylan one-two punch is the “Original Mono Recordings” box set, available in either 9CD/9LP collections. The “Original Mono Recordings” box set contains Dylan’s first eight full length albums in the way Dylan intended them to be heard. Even though stereo recording was available as early as the 1950s, many musicians still preferred their recordings to be released in mono, and was the dominant commercial format at that time. This set faithfully restores the original monaural mixes, as well as the packaging and labels that were included with the original releases. An extensive essay from author and Dylan aficionado Greil Marcus is included within the set’s deluxe book, as well as rare and vintage photographs. Albums included: “Bob Dylan”, “The Free Wheelin’ Bob Dylan”, “The Times They Are A-Changin'”, “Another Side of Bob Dylan”, “Bringing It All Back Home”,  “Highway 61 Revisited”, “Blonde on Blonde” (double CD/LP) and “John Wesley Harding”.

Customers who order these sets through Amazon also may receive “Bob Dylan In Concert: Brandeis University 1963”. This recording has never been released in any form until now, a tape that was recently rediscovered by the owner, which had been sitting in the private collection for nearly 50 years. The audio quality is impeccably good for this 7 song collection and is a real treat for Dylan enthusiasts. The CD was originally available to Amazon customers during the pre-sale for the two Dylan sets, however, it is a limited release available while supplies last.