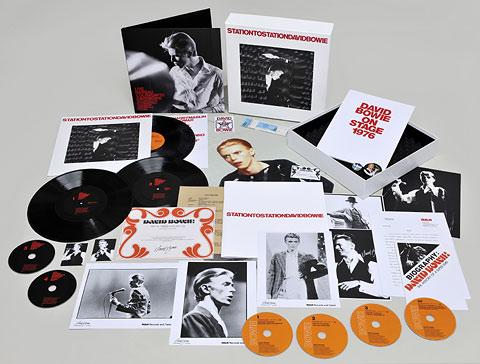 Have you ever loved a band or musician so much it hurt? Can recount all of the times you nerded-out in front of a loved one over an album’s release? Well, all of you Bowie fanatics out there (myself included) can have your wet dream with David Bowie’s “Station To Station Ultimate Fan Experience” Deluxe Box Set, complete with a treasure trove of Bowie music and visual goodies.

This 5CD/3LP/1DVD set is no laughing matter. It may actually cause you to either A) overdose on the Thin White Duke, or B) cause serious anxiety over the enormity of this thing. I have to admit, after going through its contents there was a lot to take in.

This is quite a collection devoted to an album that originally only featured six songs, but six songs that were seen as ground breaking and ushering in a ‘new’ era of Bowie. “Station to Station” served as the first Bowie album I ever purchased, so needless to say, I geeked out over the release of this uber-deluxe beauty. What I love most is the unreleased Nassau Coliseum show on both 180g vinyl and CD for my listening pleasure at home and on the go. Thanks to Bowie and the producers for thinking ahead on this one, as vinyl sales and popularity seem to be going through the roof these days. The live Nassau show was the first thing I listened to upon tearing open the box.

I can only imagine what other audio treasures Bowie will release in the future. I’m sure there has to be something planned for his ‘Ziggy Stardust’ and/or ‘Aladdin Sane’ albums, or maybe “Let’s Dance”. Whatever gets us to re-buy your albums, huh Bowie? Of course, you know your loyal fans will be waiting with baited breath…