Sam Raimi Will Direct “The Day of the Triffids” 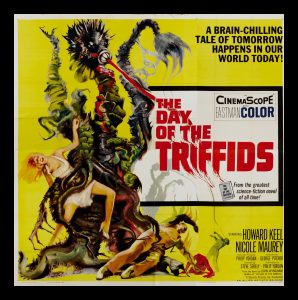 One of my favorite directors, Sam Raimi, has signed on to direct the remake of the AWESOME old horror film, “The Day of the Triffids”.  Sam Raimi started out making old horror films by the names of Evil Dead 1 & 2 and Army of Darkness.  He also went on to make the three Spider-Man films. He is a genius when it comes to entertaining an audience and filmmaking.

Oh God I hope Bruce Campbell makes an appearance in this film.  I do not see why he wouldn’t.

For those of you haven’t read the book or seen the old movie, Day of the Triffids is about highly intelligent plants who are brutally aggressive and murderous and who can move on their three like plant legs and communicate with one another and kill humans.  The plants start doing this to the humans after a meteor shower renders all who witnessed the meteors falling to become blind which is like 99% of the population.

I can’t wait to see this.