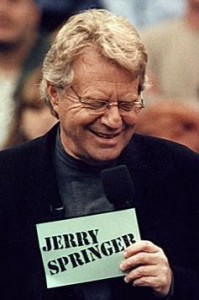 This coming up Monday, Jerry Springer will be celebrating his 20th year on his infamous tv series.

He will be celebrating by airing the first new episode of his new season of “Jerry Springer”.  No word on what the topic will be, but does that really matter?  We do know it will involve a fight though so it is good to see nothing has changed.

Jerry said about his new season; “We’re now getting the children of our original guests,” says Springer, “which is just wrong because they were told not to procreate.”

He continues to say;  “We do a circus. We’re tongue in cheek.”  “We’re just crazy. If anything, it’s that people realize I don’t take it seriously. I’m not up there pretending that this show is saving the world. Our show is just plain silly. It has no function, other than momentary entertainment.”

So be sure to set your recording devices and enjoy a ridiculous hour of TV next monday.