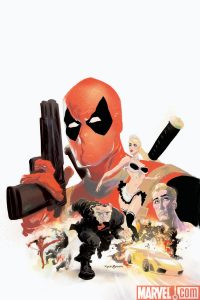 Just like Punisher Max the series delivered a hardcore punch to the comic crowd over the last several years, it is Deadpool’s turn to take the reigns and get its own rated “R” series. That’s right. Hardcore Deadpool.

Here is the press release from MARVEL.

“Marvel is proud to present your first look at DeadpoolMAX #1 from the critically-acclaimed creative team of writer Dave Lapham and artist Kyle Baker! That’s right “Deadheads”, everyone’s favorite Merc With A Mouth gets his very own MAX series! When there’s a problem that’s bigger than any government, special ops team, or C.I.A. smart bomb can solve, they call in the one man crazy enough to solve it: Deadpool. Hammerhead has amassed the world’s most powerful criminal organization and it’ll be up to Deadpool to go in undercover to bring the whole thing tumbling down. And no Deadpool story would be complete without an appearance from Agent Bob! Can Deadpool complete his mission before being sidetracked by a busty French Maid? Will Bob be able to keep Wade on target? Find out this October in DeadpoolMAX #1!”

Due to content, DeadpoolMAX #1 is intended for Mature Audiences only.

Looking good. Come check the Boomstick Webstore out in October and get in on this BADASS comic.