Cowdefender Catches a “Catfish”, but Does He Throw it Back?? (Review) 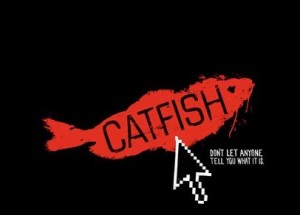 Hi folks, Bryan (Gumbercules9000) here.  I’m sure most of you have heard of a film called CATFISH, but you have no idea what it is about.  The marketing team for Catfish has done a great job of not letting anyone know for sure.  Cowdefender has seen the film and has written a three part review.  The 1st part has very little spoilers and the 3rd review has major spoilers so know now before you read that spoilers are lurking in the reviews.  Enjoy.

The characters and the story arc were very believable. It flowed properly. The front end of the movie is all about creating the circumstances where the end could play out.  You follow Nev.  His brother is a filmmaker and he is a photographer.  Nev has been corresponding with a girl named Abby for a couple of months and his filmmaker brother decides this facebook age pen pal friendship should be documented.  Nev befriends Abby’s family, mother, father and half-sister.  He starts really hitting it off with Abby’s half-sister, Megan.  The documentary then centers a bit more about Nev’s connection to the whole family.

This movie was not what it was implied to me. The music, the trailers gave the impression that it was headed a direction that it wasn’t. I can’t tell if that’s clever or deceptive marketing. Not knowing where it was going was the point, I guess.  Catfish marks yet another step in the evolution of the fake documentary / thriller genre.  Blair Witch Project started the ball rolling and movies like The Fourth Kind, The Last Exorcist and Catfish nudge it in directions that are a bit more watchable and a bit more directed (as real documentaries are, few just present you raw footage trimmed, they typically edit it to hell, narrate, interlace with graphics, etc.  Had Blair Witch been totally real it would’ve been an awful documentary with lazy documentarians at the helm.  Catfish was as sleek and polished as a documentary should be.

This movie didn’t go anywhere all that compelling. It took an interesting premise, a premise that could’ve gone any direction. A monster that collects heads, lonely young seductress murderer, aliens trying to understand human interaction, it could’ve been a dude… but instead it was what it was. I expected the movie to have some brilliant twist, some punch in the gut. I was waiting for that punch in the gut more and more.  I’d just watched The Last Exorcist a couple weeks back and there are parallels.  In that movie there’d been some weirdness in the first 70-80% of the movie, but all pretty explainable.  Then the crew in that film decided to go back to check on something.  At that point of that movie all hell broke loose.  In Catfish there was a moment where the crew decided to go back and I thought “here we go!”  It was soon REALLY clear that the punch wasn’t coming. And it never did.  I suspect that those that don’t look deeper into it will likely think the movie is real because the ending wasn’t anything nuts.