The finale to WandaVision was equal parts satisfying and frustrating. While it tied up all the loose ends of the focus of WandaVision, it also punted on several teases and reveals that it had been dragging out since early on in the season. Viewers have come to expect little teases here and there but rarely does a Marvel property fail to cash in on any of the tricks it pretended to have up its sleeve.

The episode picks up right where the last episode ended with Wanda facing down Agatha as Agatha chokes her children. As Wanda and Agatha battle the boys flee to their house to watch out the window. Wanda learns that every time she attacks Agatha she is transferring some of her power to her in the exact same manner that Agatha harnessed the power of all the witches in her origin flashback. Panicked, Wanda throws a car at Agatha before encountering the white Vision who attempts to crush her head. The hex version of Vision who we have watched all season rescues her and begins to battle the white Vision in the sky above Westview.

Wanda and Agatha move their showdown to the town square where Agatha wakes up the town members who all surround Wanda and beg to be freed. In a state of fear, Wanda begins choking them before snapping out of it and attempting to bring down the hex. As Wanda brings down the hex, Agatha laughs as Wanda’s children and Vision start to disappear in front of her. Agatha reveals they can only live in the hex and Wanda puts part of the hex back up. Just then SWORD soldiers surround the family. Vision leaves to take on white Vision, Wanda flies off to Agatha, and the boys handle the military. 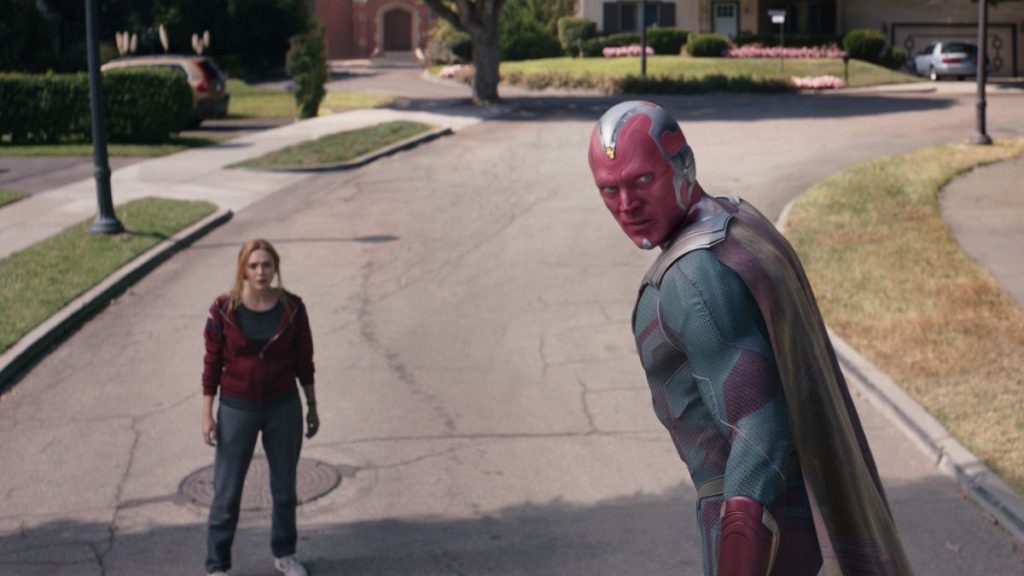 Inside Pietro’s room, we find Monica being held captive by Pietro who is clearly under a spell. After a short while, Monica uses her powers to see that the thing controlling Pietro is the necklace he is wearing and rips it off of him waking him up. Monica also learns that he is NOT the X-Men version of Quicksilver but is just a local actor Agatha was controlling.

Monica rushes to the town square just in time to save the boys from the director of SWORD who decided shooting children was a correct course of action. The bullets have no effect on Monica due to her powers and the head of SWORD tries to flee before Darcy traps him with her car.

White Vision tells Vision that his directive is to destroy Vision. Vision poses a riddle to him regarding a ship being rebuilt and if it is part of the same ship. As they have a philosophical debate, white Vision realizes that he is also part of Vision and thus he may have to destroy himself. White Vision allows Vision to unlock his memories within him and White Vision gains all the memories from the entire MCU but none of the personality. White Vision declares that he is The Vision and leaves the hex altogether. Wanda tries to give Agatha a nightmare as she did to characters in Age of Ultron but Agatha takes control and reveals to Wanda that she may be powerful but she knows nothing about spells.

Vision, Monica, and the twins watch Wanda battle Agatha over the sky of Westview. As both witches blast each other with powers the sky illuminates red and stormy. As Agatha absorbs Wanda’s powers we see Wanda start to die as her hands turn black and her face looks like a zombie. As Agatha starts to gloat and goes in for the kill it is revealed that Wanda painted the runes on the walls of the hex surrounding the town. These are the runes that Agatha used to prevent Wanda from using her powers in the basement. As Agatha realizes that she has been outsmarted Wanda absorbs all of her power and dons her full Scarlet Witch costume for the first time in the MCU. Agatha continues to tell Wanda that she has no idea what she has unleashed but Wanda ignores her and rather than kill her, forces her to be a neighbor in Westview forever.

The hex begins to come down and Vision and Wanda walk their kids home and tuck them in. They say goodnight and goodbye to them then go downstairs to say goodbye to each other. As the hex falls down completely Vision says, “We’ve said goodbye before so it stands to reason…” Wanda finishes while crying, “We’ll say hello again.” The hex is gone and Wanda is alone. She walks to the town square and patches things up with Monica before flying off, leaving Westview forever.

The first post-credit sequence reveals that an FBI agent is a Skrull and asks Monica if she can meet with Monica’s Mom’s old boss (presumably Nick Fury) in space and Monica smiles. The second is Wanda in a cabin drinking tea while her body reads an ancient book of spells in an exact manner Doctor Strange hovers and sees the future as she hears her twins call for help.

WandaVision was a success and a very fun nine episodes. The internet may have got ahead of itself with the speculation about cameos and reveals but one can’t deny the disappointment surrounding the Pietro trick. At some point, mutants are coming to the MCU and this seemed like a very interesting way to start that process. For the show to use Evan Peters as a gag for this long seems a little shortsighted and partially cruel but this was an instance where it wasn’t a Reddit thread showing the audience breadcrumbs but the show itself. It also seemed odd that white Vision is just out there in the World with 100% of his memories and he refused to help in the final battle, nor was he mentioned to Wanda, or even discussed by Monica when cleaning up Westview. We all know Vision will show up again now but the show made a big deal about a billion-dollar weapon on the loose to just ignore him in the end.

These minor complaints aside, WandaVision was totally worth the nine-episode investment and audiences are going to be ready for the multiple future adventures with Wanda moving forward as this show and her role in the next Doctor Strange movie makes her the most important Avenger moving forward.