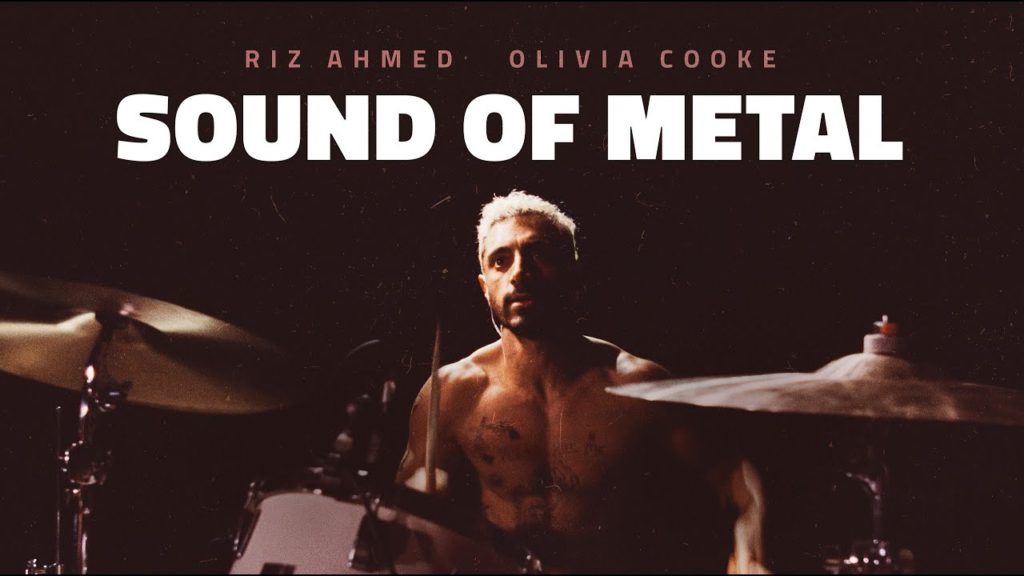 “Sound Of Metal makes its audience feel everything. Highest Recommendation.”

Sound of Metal is one of the most heartbreaking, touching, and profound movies in recent years. It is a beautiful film anchored by Riz Ahmed’s performance which should be getting some awards consideration in the coming months. This is easily the best drama of 2020 and is already at the top of the 10 Best films of the year.

Sound of Metal follows the story of Reuben (Ahmed), a drummer in a two person metal band with his girlfriend Lou (Olivia Cooke). Reuben and Lou are touring the country playing small gigs to loud raucous crowds when one night, Reuben suddenly loses his hearing. The sense of sound returns to Reuben the next day but he is so disturbed by what happened that he goes to see a doctor who informs him that he is going deaf. The rapid onset of this causes Reuben to panic and with the help of Lou and another family member he reluctantly enters a home for deaf addicts. There he slowly learns to live with his condition while trying to regain the sense and life that he knows is lost forever.

It’s difficult to think about another actor who could have pulled off what Riz Ahmed did in this movie. His ability to react to the situation with such an understandable amount of shock, rage and fear using only his facial expressions is so brutally devastating at moments that it felt uncomfortable to watch. At the start, his rage boils over to frustration then to acceptance, and then all the way back to denial and finally the realization that this is his life would be so much less believable if the character wasn’t in his capable hands. The underlying rage against this blindsiding predicament that this loss of hearing has put him in is softened as Reuben joins the home run by a friendly lip reader named Joe (Paul Raci), who tells it like it is and doesn’t allow Reuben to feel bad for himself or wallow. He also forces Reuben to accept his reality and the bitter pill character that Joe sounds like on paper does no justice to the caring and warmth he puts on screen. As Reuben begins working to learn sign language with children who are at his same level we see the charisma that Ahmed can bring to any role and the character of Reuben in these scenes feels like a far cry from the earlier rage.

But every story must move the plot forward and much like the film The Wrestler, Reuben is only doing all of these things at the home for the deaf because he still mistakenly believes he can get his life back to the way it was. These moments could easily turn into an after-school special but the writing and directing of this part of the film feels honest to the character we know and not everything unfolds the way it would in a typical Lifetime movie. The honesty of Ahmed’s performance as he comes to grips with the absolute loss of his way of life is just heartbreakingly real.

One of the technical aspects of this movie that made this movie stand out is the sound design. The volume and sound effects used as Reuben is gaining or losing his hearing was fully immersive and was unexpected. Not many people know what it is like to lose their hearing but the director and technical team did such an amazing job of allowing the audience to sense the level of frustration one would feel by experiencing it along with Reuben. Even when Reuben gets an implant that he thinks will give him back his hearing he fails to read the fine print and understand it will allow him to hear sounds but it won’t sound like it used to. The audience experiences that moment through sound with Reuben and it was a moment where an onslaught of emotions appeared.

The movie is not a downer. It is honest. Every bit of the plot, directing, acting, and sound all worked in a beautiful concert to portray what is a pretty harrowing experience for the main character. There is sympathy with Reuben and in the smallest sense are able to experience some of the things happening to him through the use and loss of sound. Movies are meant to make its viewer feel something and Sound Of Metal makes its audience feel everything. Highest Recommendation.