“Jingle Jangle succeeds and is a fantastic addition to the holiday realm.”

Tis the season to be jolly and entertained with all the holiday-themed movies in anticipation of that big Christmas Day. Netflix is no slouch when it comes to these holiday films and tv shows. Their newest one titled Jingle Jangle is a big spectacle of epic proportions that manages to bring in the Christmas spirit while adding a few new elements to the story, along with a stellar cast including a surprising and amazing singer in Forest Whitaker. Jingle Jangle is one fantastic holiday film that no doubt will be the hit of December for families everywhere.

Not only is Jingle Jangle a fun holiday movie, but it’s also an 11-song musical with catchy tunes and messages that should satisfy all ages. Behind this menagerie of whimsical characters and Christmas spirit is David E. Talbert (Baggage Claim, Almost Christmas). Talbert is also an accomplished playwright, leading this film to look like a grande Broadway stage performance in certain sequences, complete with very elaborate and fun musical numbers, that have been inspired by steampunk versions of Willy Wonka and The Chocolate Factory and Chitty Chitty Bang Bang.

The film starts out with an elderly woman (Phylicia Rashad) putting her grandkids to bed where they want to be read a nighttime story. One calls out for Twas the Night Before Christmas, to which the grandmother replies, “I think it’s time for a NEW story”. This quote sets the tone with many new and unfamiliar characters that introduce Jeronicus Jangle (Forest Whitaker), a toy inventor and maker who is a hair away from creating the next big thing for families across the world – Don Juan Diego, a toy robot voiced by Ricky Martin. Jeronicus’ apprentice named Gustafson (Keegan Michael Key) is persuaded by this rogue robot to steal Jangle’s book of ideas and inventions and start his own company. This puts Jeronicus and his wife and daughter on a downward spiral, where loses everything. 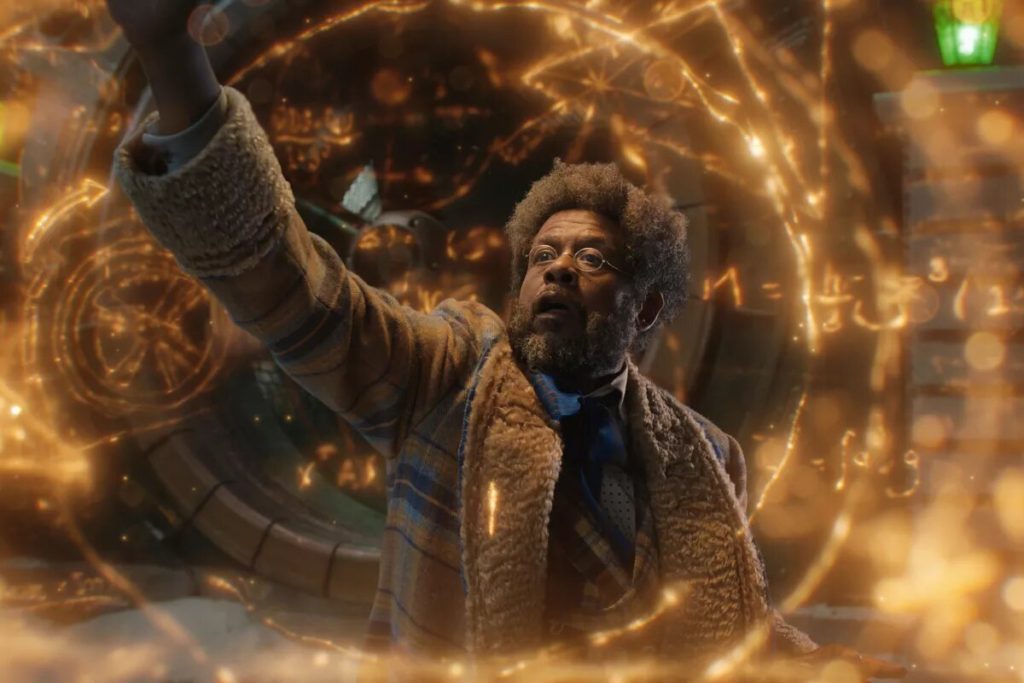 A short time after, his wife dies and his daughter moves away. The film cuts to 30 years later where Jeronicus is running a pawnshop of sorts and is being hounded by the bank and other people. Now in the present day, Jeronicus’s daughter has a daughter of her own who has the same inventing magic he did and heads to live with him for a little while as he’s working on a secret new invention with his new apprentice named Edison. Meanwhile, a very rich and powerful Diego and Gustafson have run out of Jangle’s ideas and need to steal more from him, but now with the help of Journey, Jeronicus can fight back and find the true meaning of life and the holidays once again.

Whitaker is simply a pleasure to watch on screen here and has a wonderful voice during his musical numbers. He’s come a long way since Bloodsport. Keegan Michael Key is perfectly hamming it up as a scene-stealing villain of epic proportions as is Ricky Martin’s voice work for Diego. The set design is magnificent and evokes those nostalgic pieces from the Wonka universe and older Hollywood films that sparked imagination in kids some decades ago. The only real complaint is at times, Jingle Jangle feels a bit overwhelming. There are too many side plots and so much glitz and glam during the big musical sequence that at times, it feels like a mega-budget blockbuster action film. Still, when the film is true to its core, Jingle Jangle succeeds and is a fantastic addition to the holiday realm.

WATCH ON JINGLE JANLGE ON NETFLIX