“Dolly Parton’s Christmas On The Square can turn a Bah-Humbug into a Merry-Christmas on a dime, despite its heavy cheese. “

With the current state of the world where it is at this moment, everyone could use a little holiday cheer strapped up in angelic sequin angel wings, rhinestone cowboy boots, and the lovely voice of Dolly Parton. Forntualty, Netflix has just that recipe with Dolly Parton’s Christmas On The Square that can conjure up that cheese-filled smile and laughter through a 25-song musical film that will bring out the Christmas sweaters and egg-nog for the whole family to enjoy.

Made by the iconic veteran actress and filmmaker Debbie Allen (producer of Amistad, Grey’s Anatomy and sister of Phylicia Rashad), Christmas On The Square is at its core, a stage musical, which is evident in this setting where every location and set feels like it’s incredibly and perfectly faux. The characters sing their hearts out and the dancers are never short of a high kick, snap, or swing as they go about their merry way in this fictional perfect town where Christmas is a way of life. In a way, this feels like a prime-time special from the Golden Age of Hollywood.

Dolly plays a spirited angel with boots who makes sure the town never gorgets their way. However, one lady has surely missed that memo, and she goes by Regina (played by the phenomenal Christine Baranski (Mama Mia, The Birdcage), and is a Scrooge-like character who is annoyingly mean to everyone in town – even kids, and is set on evicting the entire town to put in a mall to further her wealth. Even her childhood sweetheart (Treat Williams) she abandoned for greed is beginning to lose hope in her. 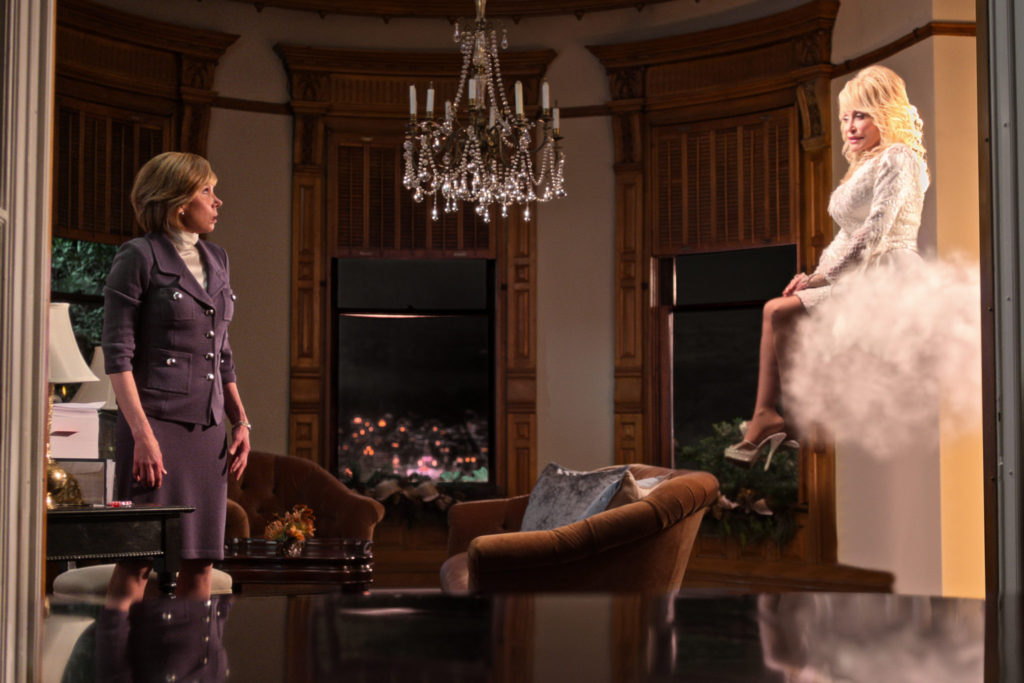 That being said, this is a Christmas musical with Dolly Parton, so predictably so – everything turns out perfectly with a pretty bow on top for good measure. There’s a Christianity element to it, but it’s never preachy, but rather filled with modern ideas of everyone, no matter race, color, or religion is accepted and equal as Dolly sings her heart out at 74 years old to these themes. Dolly Parton’s Christmas On The Square can turn a Bah-Humbug into a Merry-Christmas on a dime, despite its heavy cheese.

WATCH DOLLY PARTON’S CHRISTMAS ON THE SQUARE ON NETFLIX