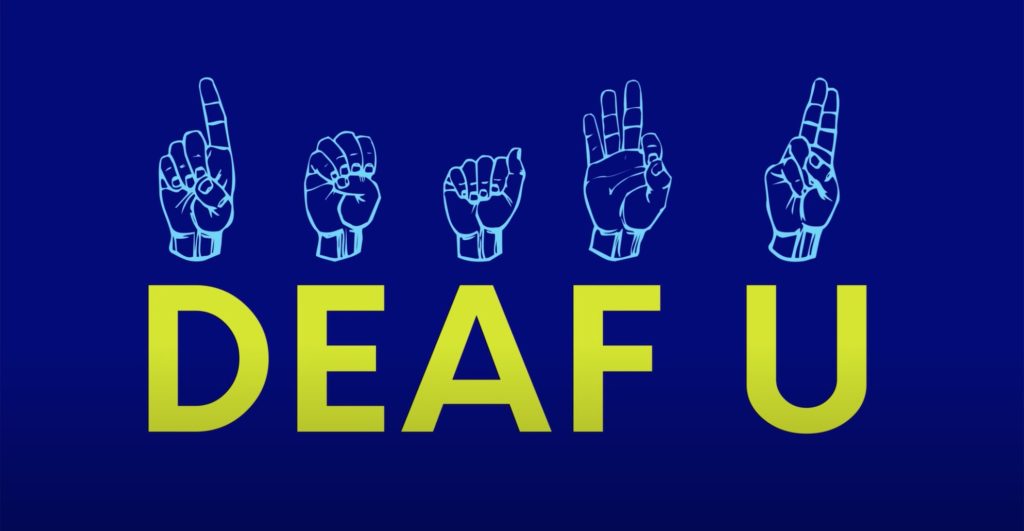 “Deaf U Season 1 is a stunning and important look into the modern dating world of student life while at the same time providing some insight into the deaf and hard of hearing community. MUST-WATCH!”

Netflix signs its way to a new documentary series with Deaf U, a phenomenal eight-episode first season about a group of students who attend Gallaudet University in Washington DC. The series doesn’t exactly follow a strict guideline into the hardships and struggles of learning and receiving that degree of higher education, but rather pursues the dating life, social scenes, and sexual encounters between a few students as they navigate their college life. It’s a wonderful look into their world, which has all the elements of a Primetime soap opera, complete with sex scandals and comedy.

Gallaudet University was founded in 1864 and named after Hopkins Gallaudet, a prestigious person for the advancement of deaf education. Initially, the university was for the deaf and blind, but later became the one and only higher education center where all programs and classes are geared toward the deaf and hard of hearing. It’s a beautiful university with many different walks of life and classes to choose from, along with their own sports team.

Among the closely followed students are Rodney Buford (a handsome football player from a great family who knows exactly who he is and never apologizes for playing the field, falling in love, or expressing himself), Cheyanna Clearbrook (a beautiful woman who has a following on social media with her YouTube videos and feels like an outcast aongst the students), Renate Rose (a lovely pansexual activist who is navigating her own path with her girlfriend as she enters some slam poetry competitions and tacksles her past demons in therapy), Alexa Paulay-Simmons (a remarkable woman with a passion for finding love, but has been thrown into some uncenratin situataions amongst her fellow students while coming to terms with her unpresent father), Daequan Taylor (a loyal and great young man who so desperately wants to have a family and is coming to terms with his childhood), Dalton Taylor (another atheletic student who falls quickly for women, but has trouble expressing his emotions or making the first move), and Tessa Lewis (a pretty woman who comes from an elite, wealthy family and seems like royalty).

This first season of Deaf U follows these students very close from their dorm rooms to the football field, to parties, and eventually under the sheets and everything in between. Packed with talking-head interviews and reality-style footage, these students showcase real emotions of trying to fit in amongst a small community that can promote a ton of gossip. One great thing about this docuseries is that each student genuinely seems to care for one another, even though there is some major conflict amongst them. The first episode is charming, fun, and seems like just another run-of-the-mill docuseries about dating, but the last few seconds of this episode has an M. Night Shyamalan style twist that will set the stage for the rest of the show on just how intense some of these social and sexual situations can get.

From here, the show walks in stride with each person as their own unique transformation into their better selves reveals some truly amazing human beings who are looking to make a difference in the future and finding love, sex, and maybe a little rock n’ roll, while trying to fit in amongst their peers and with society. The little intricate moments of sign language between two lovers who must stop cuddling in order to communicate, or the amount of facetime calls just to say hello is simply impressive and gives a small glimpse into these noteworthy individuals.

Deaf U Season 1 is a stunning and important look into the modern dating world of student life while at the same time providing some insight into the deaf and hard of hearing community. MUST-WATCH!

WATCH DEAF U SEASON ONE HERE