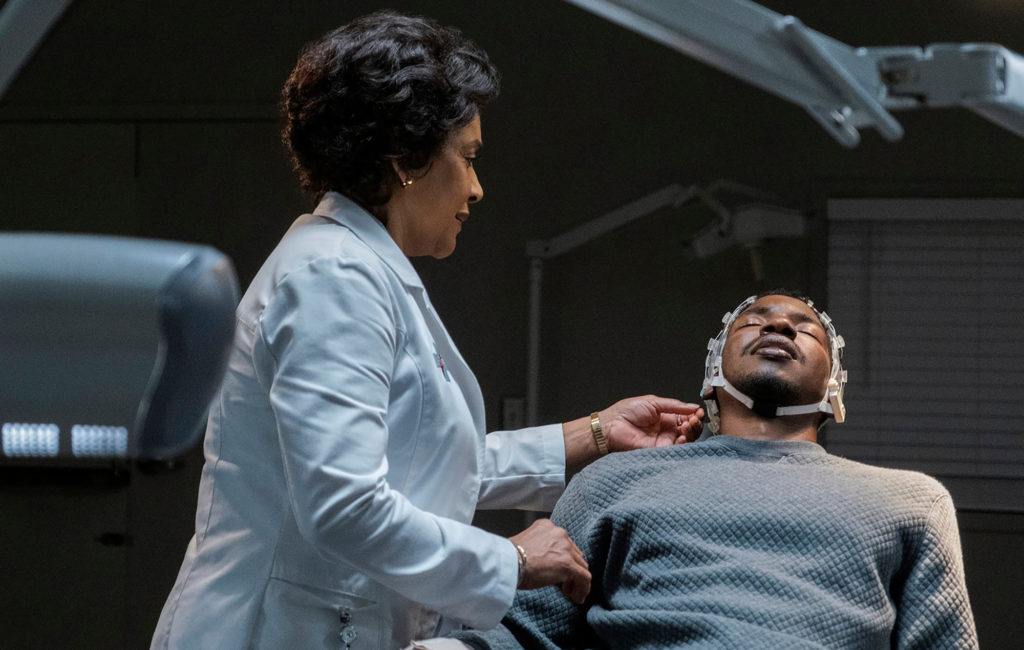 “Black Box feels like a rejected script from Black Mirror that was stretched from 47 minutes to 90 minutes.”

Black Box is a psychological thriller about a single father named Nolan played by Mamoudou Athie as he struggles with memory loss after a car accident in which his wife was killed. Nolan’s best friend is a doctor named Gary who helps him through most days as he struggles to sometimes remember who he is. Nolan decides to enter an experimental memory recovery treatment headed up by lead researcher Lillian played by Phylicia Rashad. This treatment causes Nolan to see visions of violence and he begins to question his own identity.

Black Box is shot very well and the performances are all good. Mamoudou Athie really stands out as Nolan who portrays the paranoia and mental breakdown he is suffering in a very emotional way. This happens to be the director’s first full-length feature film and at times you can tell but for the most part, this paranoia thriller draws from previous movies and shows to show the confusion of the character. At one point Nolan gets stuck in “his brain” and it is shot exactly like the sunken place from Blumhouse’s vastly superior Get Out.

The main issue with Black Box is that it feels like a rejected script from Black Mirror that was stretched from 47 minutes to 90 minutes just so it could be called a feature. At certain points in this movie, you can feel the gears turning to just drag this out to satisfy the runtime requirement. Of course, the experimental treatment uses technology that isn’t all that it seems and the researcher running the program has ulterior motives.

We can tell that from the trailer! The problem is when we stretch it out for no reason the story frays at the edges and you cross into boredom and repetitiveness. If Blumhouse Television’s goal moving forward is to be an anthology series then they need to be confident that a tight 45-minute paranoia thriller will be a more satisfying experience than a longer predictable movie that drags on and on.