“Working Man is a lovely film that tackles an important subject that is all too real these days. “

An older man looking for peace and work late in his years rediscovers his happiness with a new friend and a worthy cause in the wonderfully made and feel good film Working Man (now streaming on VOD). Film director Robert Jury has perfectly crafted this character-driven drama with a great cast, tight script, and sincere direction that focuses on the working class who have been diminishing as of late while factories in towns across America have been turning off the lights.

Set in present-day, Working Man follows Allery Parkes (Peter Gerety), an older man who has worked at the local plastics factory for many decades. His life has consisted of the same routine for hundreds of thousands of days, bringing the same metal lunch box to work with the same sandwich and coffee. His wife Iola (Talia Shire) fixes his dinner and wonders why he still goes for late-night walks without her. As the story unfolds, these late-night walks and removal from having a happy existence is a result of a tragedy in his family. 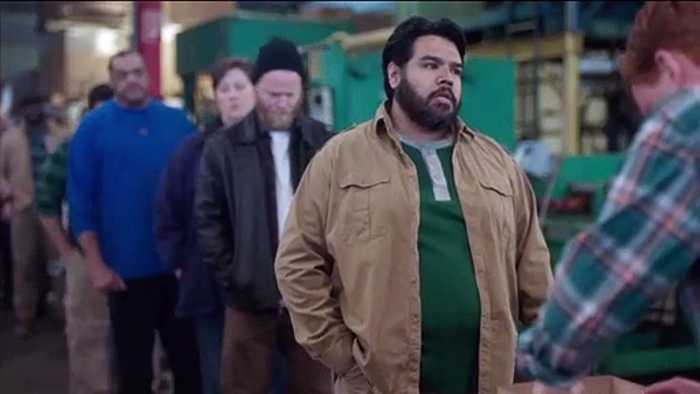 Allery’s world is turned upside down when the factory is sold and shuts down. That doesn’t stop Allery from bringing his metal lunchbox to work still, as he breaks in and starts to clean all the machines and floors to keep some sort of light in his life. His neighbors who also work at the factory take notice where one new neighbor Walter (Billy Brown) follows him to the factory and helps out with cleaning. This ignites a fire in the town and laid-off factory workers to come back and despite being closed, finishing up the existing work orders. With Allery’s new lease on life, he can get back to the things he once fell in love with.

The film pulls at the heartstrings in all the right ways as this curmudgeon of a man with very few words transforms into his better self that he once was. Jury throws in a couple of curveballs with Walter who has a few dark secrets from his past, but it never strays into truly dark material. It’s done in an elegant way where being a part of these character’s lives seems close and personal. Gerety pulls off this transformation perfectly and is a likable man despite his quiet demeanor through most of the film. Talia Shire hasn’t been in too many films as of late, but her 2nd half performance in this film is a reminder of why she is one of the greatest.

Working Man is a lovely film that tackles an important subject that is all too real these days.