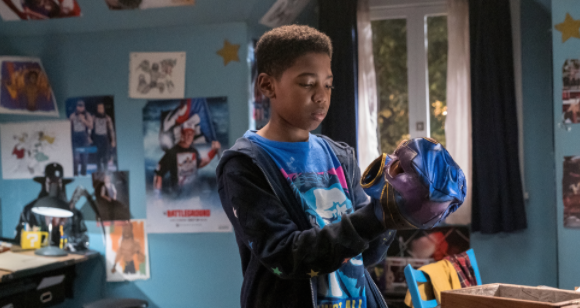 “As The Miz would say, The Main Event is AWESOME!”

Making its way down to the squared circle comes the new family-friendly Netflix comedy, The Main Event, a funny film from the streaming giant that has a tag-team partner in the WWE. Following a kid who discovers a magical mask that makes him a superhero pro-wrestler, this fun movie mixes in some good laughs, wrestling superstar cameos, and a little heart and soul that has it earning its own championship belt.

Director Jay Karras enters the foray of feature films for the first time with this Netflix endeavor, coming off a great list of television series, including Workaholics, Parks and Rec, Brooklyn Nine-Nine, and Dice, and nails it with a safe, yet entertaining forum. The film is good for the whole family and if anyone is a pro-wrestling fan, there are some great cameos and easter eggs throughout. 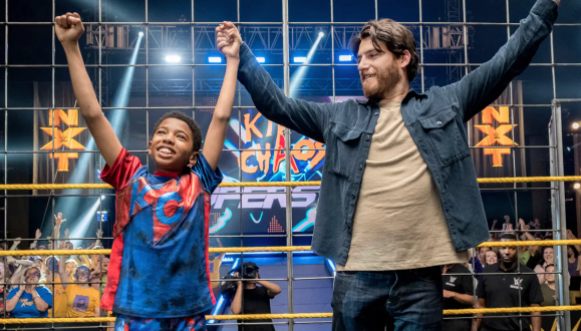 The film follows the young 10-year-old kid Leo, who is obsessed with the WWE and its superstars. He lives with his father (Adam Pally) and his grandmother (Tichina Arnold), who all are trying to mend the pieces back together since Leo’s mother left the family for the big city. After successfully avoiding some bullies at school, Leo discovers an old luchador wrestling mask that when put on, gives him Superman-like strength, where he can lift a car or throw a 400-pound man a hundred yards in the air. Not only that, but the mask also gives Leo a deeper voice and a huge boost of confidence in the trash-talking department, perfect for any aspiring pro-wrestler.

Luckily for Leo, a commercial appears on his television where The Miz tells him that NXT will be in his town, holding a tournament of auditions where the winner will win money and a WWE contract. Leo dons the mask, enters the contest, and crosses paths with some famous wrestlers while learning that there is more to life than just fame, fortune, and physical strength. 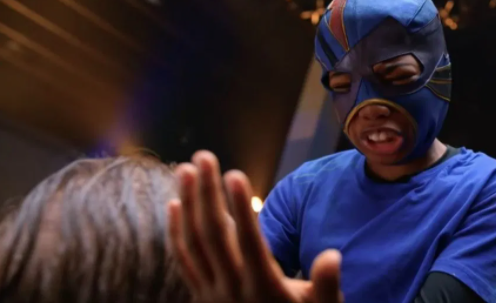 It’s a formula that’s been done a million times, but never in a steel cage match. Karras and the screenplay he works with, never takes itself seriously, which is amusing for everyone, especially for the kids. Instead of making the big suplexes and elbow drops look realistic, these pro-wrestlers can jump 20 feet in the air, throw their opponents across the building, and even let out a 30-second fart that can cause wind damage. It’s silly and charming all at the same time.

Most importantly. it’s shown on screen just how many people had a great time making this film, even if none of it makes sense and feels a little rushed and formulaic – which it is. That being said, The Main Event is a universal champion for its actors turning in good performances and committing to their roles, along with its sweet and endearing storytelling that can make a pro-wrestling fan out of anyone, “if ya smellllllllll, what The Rock is cooking!” As The Miz would say, The Main Event is AWESOME!