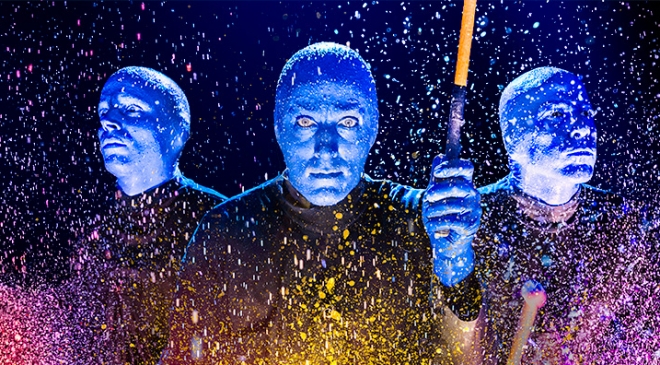 The three blue beings are back on stage in a new show that rocks hard, spews color and senses until emit a big smile. Blue Man Group has been touring since the early 1990s, where they took the world by storm with their odd showcase. Imagine if you were watching STOMP on a far moon of Jupiter with tall blue aliens giving you their own version of rock n’ roll and comedy. That’s Blue Man Group and I’m hear to say that they are still having fun and creating inventive ways to entertain.

With homemade instruments resembling PVC pipe potato guns, strange percussion setups that beam electricity and bright lights when touched, and even a rubber chicken opera, there’s not much that Blue Man Group can’t make into music or a comedy sketch. It’s all a brilliant work of art that can be even be drawn or in this case spewed from a Blue Man’s mouth onto a canvas. It’s a lot of fun for the whole family that doesn’t eat up a ton of time – roughly 90 minutes without intermission.

The Blue Man Group even journeys into the audience several times and picks several patrons to enact various situations, such as the circle of love, target practice for a water balloon, and recroding various words to make a hip-hop beat. It’s a ton of fun where some thirty years later, these Blue creatures still conjure up the best of emotions where you feel like a kid again. Such a wonderful show that I highly recommend you attend, even if you’ve seen them before.