A rarity in the theatre world, Dear Evan Hansen hit the world by storm back in 2016 that was crafted entirely on original ideas and music. Most productions today draw inspiration from books or other projects, but Dear Evan Hansen was a prototype on Broadway that has been met with huge success. Some four years later the themes and music still resonate with anyone who watches this play unfold, and you know that creators Benj Pasek and Justin Paul can strike gold anytime they want as they’ve shown with writing the songs for the film La La Land or in this case about an isolated high school student with a big lie that goes viral on social media.

So many musicals rely on their musical numbers to get them to the next spot in the show, where it seems like the spoken dialogue is just filler until the following song, but that’s not the case with Dear Evan Hansen. With songs like “You Will Be Found”, “So Big/So Small”, and “Waving Through a Window”, it’s easy to see why this soundtrack his hit the actual Billboard charts. But unlike most musicals, the narrative drama behind the music is also equally as good, which is a scarce commodity in the stage world. 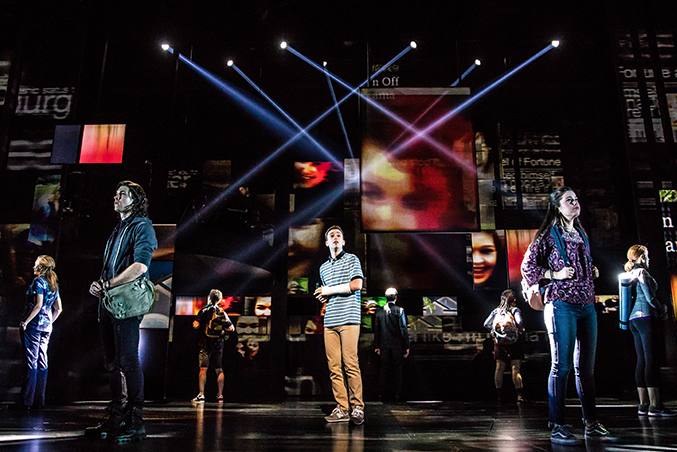 The story centers on high school student Evan Hansen, an awkward teenager with no friends and a ton of social anxiety. In his senior year, his only “friend” is a family friend who is forced to be nice to him named Jared. Evan’s therapist gives him an assignment to write a letter to himself every day explaining how each day can bring something good in his life, which each letter begins with “Dear Evan Hansen”. One of these letters ends up in the hands of the school bully named Connor, who comes from a well-to-do family. Connor ends up killing himself, where his parents and sister Zoe, whom Evan has a crush on, being to believe Evan and Connor were good friends, based on this letter. This gives Connor’s family some solace that their troubled son wasn’t always unhappy and Evan goes along with it. Soon enough the lie grows bigger, goes viral with a speech and charity in Connor’s name, and of course, spirals out of control.

There are a lot of heavy themes in Dear Evan Hansen. It’s not your shiny, bright High School Musical by any means. It deals with mental illness, suicide, divorce, abandonment, and more. As the show furthers its story, we learn the volatile relationship between him and his mother, his father leaving at an early age, and Connor’s family dynamic. It’s a sad tale, but one that should be told and has echoed loudly in our society today.

The set designs are very simplistic, using see-through screens that are a constant stream of social media videos and tweets about Evan and Connor with the addition of a few dinner tables or a teenager’s bed. Allowing for such an easy set design, it allows these amazing actors to perform without any distraction. Dear Evan Hansen is a winner from top to bottom and is not only consistent with its ability to produce memorable musical hits, but it also can conjure up strong emotions in its dramatic and important narrative.