What do you get when the co-writer and director of ‘Mac and Me‘ have access to an animatronic Tyrannosaurus Rex for two weeks? Something that looks a lot like ‘Robocop‘, but with high school students played by Denise Richards, Paul Walker, and a T-Rex. Of course, I’m talking about the infamous film ‘Tammy and the T-Rex‘.

Originally edited for a younger audience with a PG rating and released direct to home video, the restoration and distribution company Vinegar Syndrome has worked its magic to restore all of the gore for a new R-rated release. Michael, played by Walker, is dating the titular Tammy, played by Richards. Her ex-boyfriend decides to end this blooming relationship by beating Michael and leaving him for dead in a wild animal safari with his gang of lackeys. Our stand-in Frankenstein / mad scientist/neurosurgeon Dr. Wachenstein is vaguely motivated to defeat death through a giant realistically modeled mechanical dinosaur. Do not ask why it will not be covered. Luckily for Wachenstein, Michael has become the perfect specimen after falling into a comatose state.

This is where the cheesy splatter gore begins. Michael’s brain is shown being removed from his head with a jigsaw and implanted into the animatronic T-Rex. Reborn as an immortal monster, Michael escapes and starts out on his bloody path of revenge. The violence is absurd as our mechanized protagonist stops, eviscerates, and beheads those responsible for his fate. In fact, Michael has amazing control over his amazingly dexterous feet and claws. Capable of looking at his reflection in a handheld mirror, using a payphone, even a quick game of charades to bring Tammy up to speed on the plot. 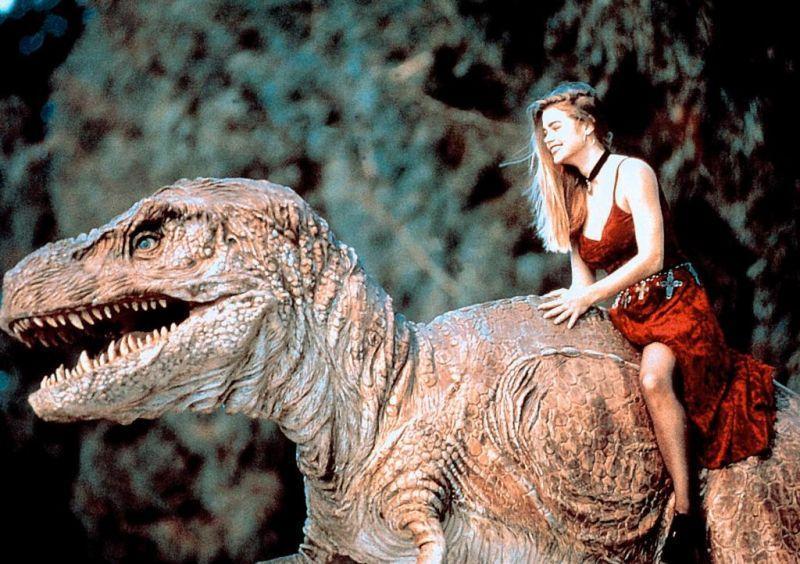 This body-swapping story temporarily becomes body-snatching at Michael’s funeral when Tammy and friend Byron attempt to steal back Michael’s body. He considered several new bodies in a local morgue in a sequence that feels more like a wardrobe change montage.

A rushed and cheap production from 1994, this movie shows its age (The handling of gay friend Byron is particularly troublesome), but the less than 90 minute run time is your friend here. I do not know how much of the movie was changed from the original home video release to this gore-cut restoration, but the results are funny, baffling, and always entertaining.  Some of the most bizarre scenes ever put to film (T-Rex in a truck bed, bubbling booze brains, and more) are perfectly restored and better looking than ever. I absolutely recommend picking this up when it is released by Vinegar Syndrome and hosting a movie night with friends. I know I will.