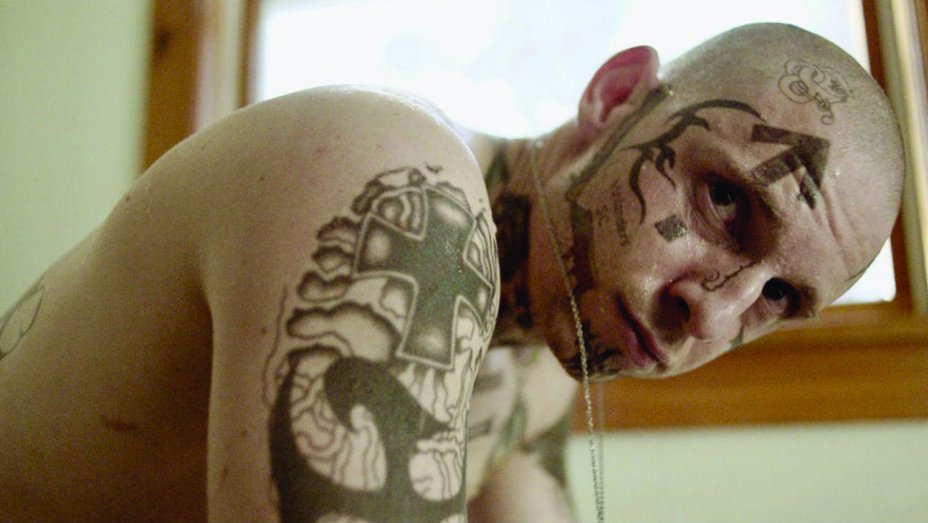 Based on the real-life story of Bryon Widener, Skin details the epic transformation from a life of hate to a purpose of love. Raised in the rural recesses of America, Widener (Jamie Bell) was molded to be a white supremacist “soldier.” Merciless in his mindless pursuit of an all-white United States of America, Widener’s world is rocked to its core. What could remove blinders from such a person? Love, of course, enter Julie Price (Danielle Macdonald) and her three adorable angels, Desiree (Zoe Margaret Colletti), Sierra (Kylie Rogers), and Iggy (Colbi Gannett). However, the Vinlanders SC will not just stand by and see its lieutenant snatched away.

From Skin’s opening sequence of stark silence and darkness to the roaring barn fire and hate rants, it seemed the director, Guy Nattiv, seeks to empty your mind before endeavoring on Widener’s journey. Good thing, too, because to see through the eyes of a skinhead and discover what truly lies beneath, viewers would need a mental reset. The transformation of Widener from horrid to redeemed is hurriedly realized in Skin. Holes in the plot regarding the emotional and psychological bond between “Babs” (Widener, what the heck was the reason for that crappy nickname) and Ma and the Vinlanders SC prohibited a convincingly difficult shackle to sever.

Bell did a solid job of personifying Widener.  He brought the pain of Widener’s 612 days of painful tattoo removal surgeries sporadically woven throughout the film, serious repentance.  You may remember Bell from Man on a Ledge running Sam Worthington or as Ben Grimm/The Thing in a reboot of Fantastic Four. He brings a depth and a fighter spirit to the role. He has potential. Macdonald and her three kiddos were amazing. No surprise with the skills of Macdonald as her performance in Dumplin’ was fierce and real. Colletti, Rogers, and Gannett partially steal the scenes, especially Gannett. A blast from the past in Mary Stuart Masterson as Agent Jackie Marks appears for a brief role. Yassss, Watts from Some Kind of Wonderful or Joon from Bennie & Joon!!

Overall, I loved to hate Skin, it will bring up a myriad of feelings as Widener fights for his freedom. The contrast of family life in the Widener household and family life in the Vinlanders SC is as tenable as light vs. dark. Kudos to Nattiv! Skin is a crucial movie in light of recent hate crimes/shootings. We need exposure to the predatory brainwashing of these hate groups in hopes of more conversion stories, mandatory summer viewing!!!