The Art of Self-Defense – Film Review! 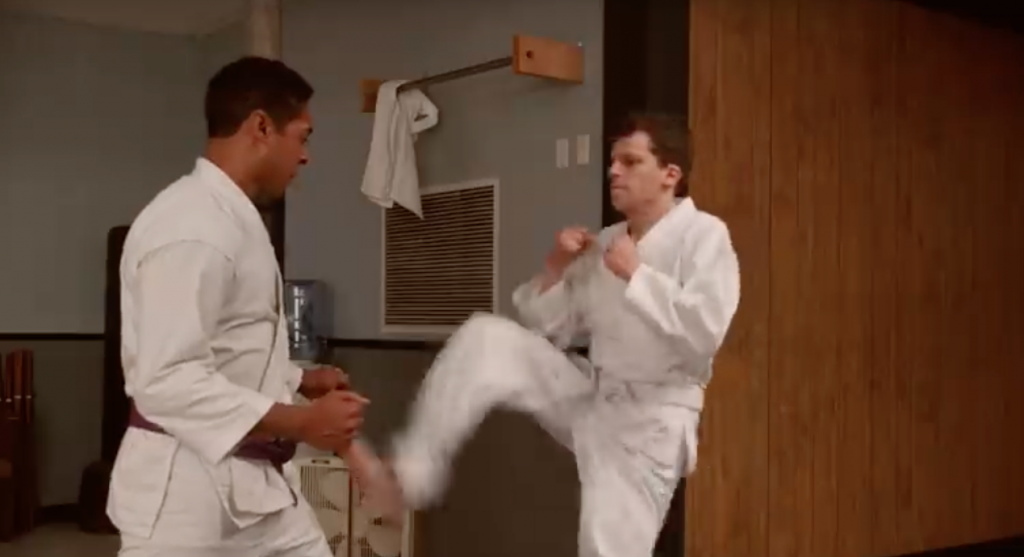 “The Art of Self-Defense earns its black belt in the annals of cinema.”

A shy, apprehensive man looks to make a major change to his life in Riley Stearns‘ second feature film ‘The Art of Self-Defense‘ that stars the fantastic Jesse Eisenberg. Part sadistic comedy and part thriller, Stearns and Eisenberg perfectly walk the line of awkwardness and confidence here. This is a film that deserves to be a big hit and seen by everyone, although I can’t help but think the masses won’t know what to do with this multiple genre story. In my eyes though, ‘The Art of Self-Defense‘ is a winner and I can’t remember seeing anything quite like it.

Eisenberg plays a guy named Casey, who is anything but sure and certain of anything in life or even about himself. He studies French, is an accountant, owns a dachshund, and lives alone. He’s the quiet, shy, and awkward guy at work, where some might say he has feminine qualities. He has no friends other than his small dog and has never missed a day at work. 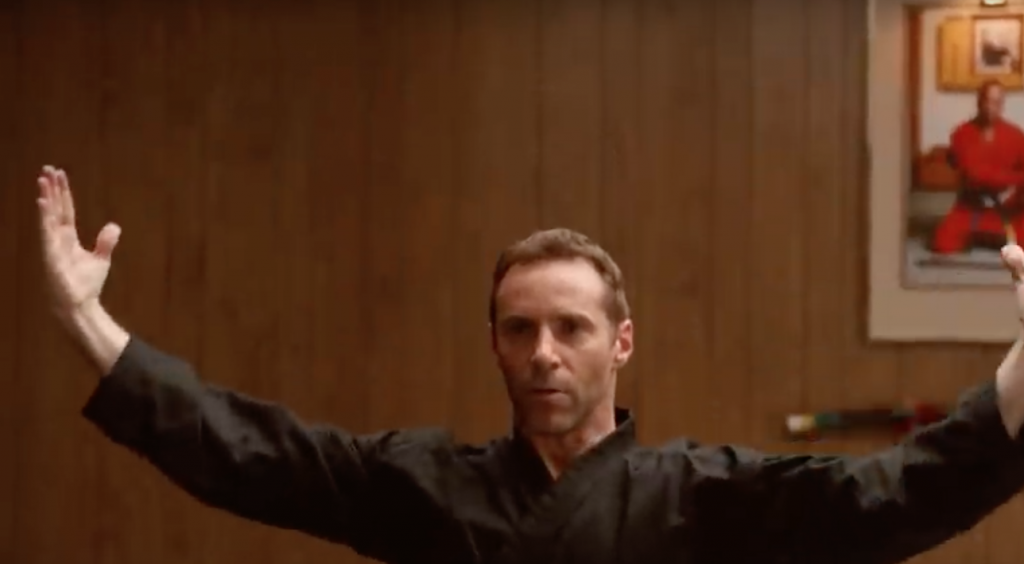 One night as he’s walking home, Casey is severely beaten and mugged by a group of masked bikers. Once Casey has recovered, he walks past a Karate place and sits in on a class where Sensei (Alessandro Nivola) is teaching his students. Casey immediately signs up where Sensei takes Casey under his wing. Casey becomes so involved in these karate classes, that his dog and job become second fiddle. This is where Sensei becomes intrigued with Casey and figures out that he wants to change and become more confident. He tells Casey to listen to only heavy metal music as it’s more masculine, along with a ton of other surface level eccentricities. It’s darkly comic as Eisenberg begins to change his mannerisms and body language to appease his sensei and himself.

As Casey continues to impress Sensei, he is invited to the night class, where Anna (Imogen Poots) is the top star and has been with the karate class since it first opened several years prior. That doesn’t mean she’s the teacher’s pet. Quite the contrary actually as Sensei’s vision of masculinity and women are not of kindness and generosity. As the film forwards the story, the suspense and tension build into a very cold and dark world for Casey as he begins to investigate his new found hobby. With some ultra-violence mixing with a dry sense of very dark humor, ‘The Art of Self-Defense‘ will leave you thinking about it for days. 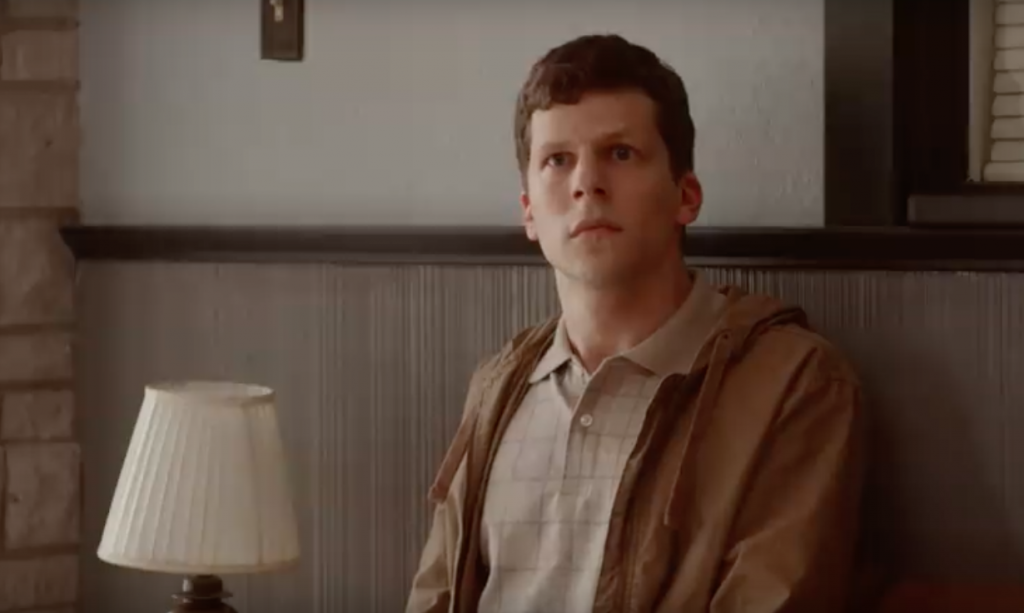 Riley Stearns has captured this setting where we can’t easily tell what year it takes place. It looks like the 1980s with tube tvs, over-the-shoulder camcorders, and older vehicles, along with a beige and brown existence for Casey where everything looks bland. But as time goes on and Casey moves up the karate rankings, new colors are introduced as well as the comedy amps up, including a fantastic bit about every day karate belts, which I’m still laughing about. 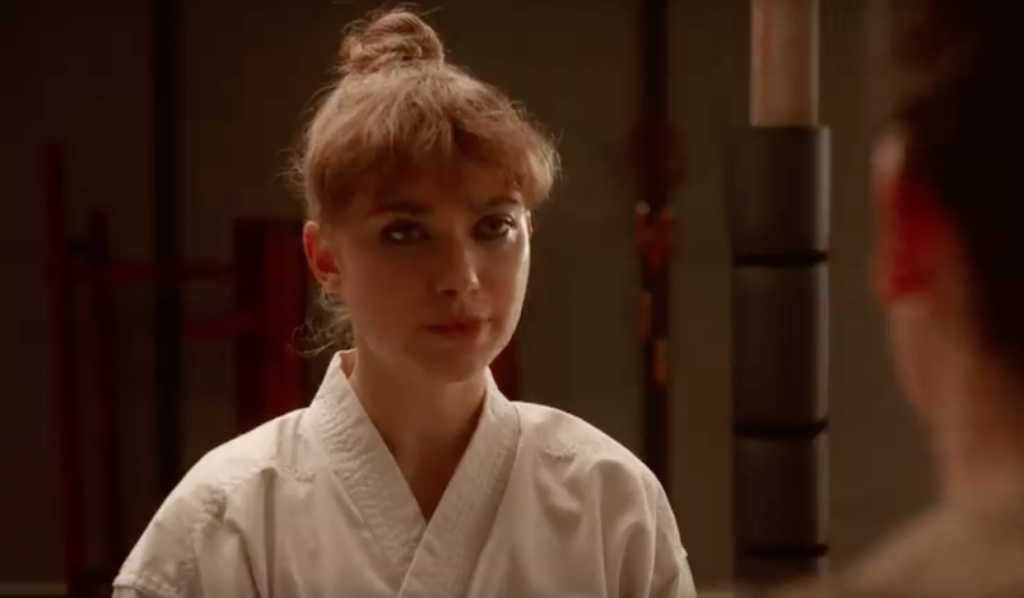 Jesse Eisenberg is fantastic in just about everything he’s done and it’s no different here as he perfectly plays a bumbling fool and switches to one hell of a confident man. It’s just wonderful to watch him perform his craft on screen. Imogen Poots is excellent and believable as this woman with something to prove, as Alessandro Nivola was born to play the role of Sensei. ‘The Art of Self-Defense‘  earns its black belt in the annals of cinema.