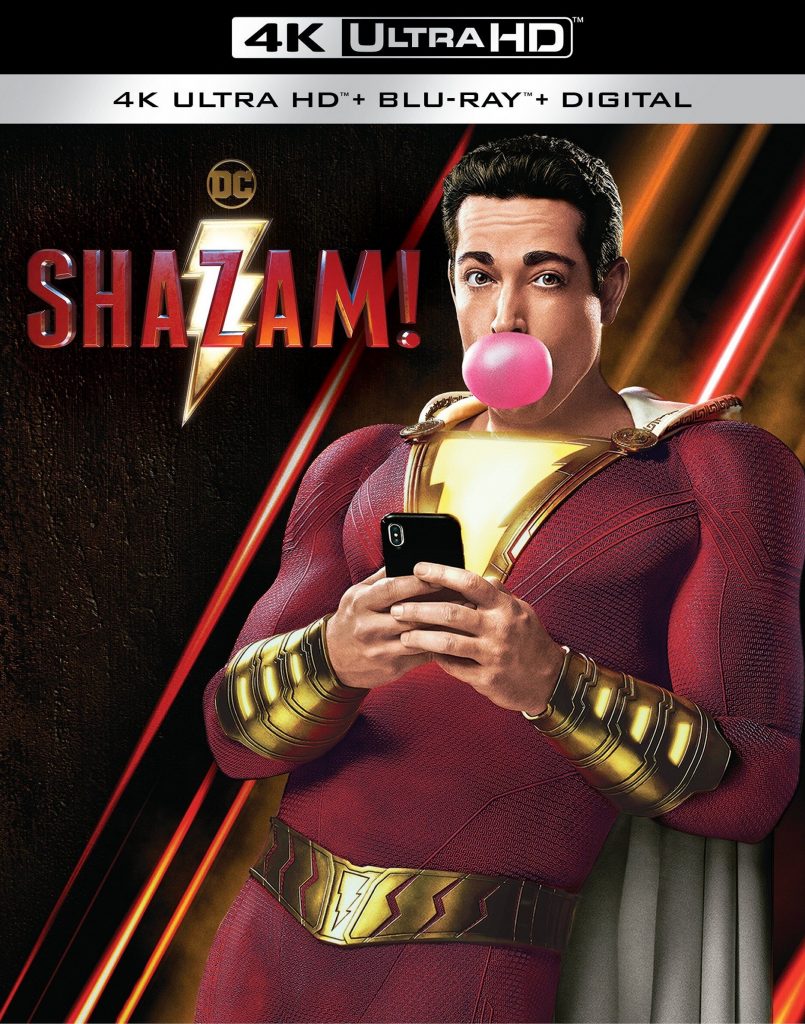 It’s easy to see that the executives at Warner Bros. and DC Comics have been listening to the fans in wanting funnier and more light-hearted superhero films after the super dark and very adult previous films. With ‘Aquaman‘, they literally threw in everything and the kitchen sink into that film to bring a wild, chaotic affair that was silly, yet fun in a “so bad it’s good” kind of way. There is much more of a balance with ‘Shazam!‘ and dare I say it in my most impressive imitation of WWE’s The Rock – “Finally! DC has made a fun movie!” I stand by that statement too as an odd choice in director David S. Sandberg (‘Lights Out‘ and ‘Annabelle: Creation‘) took his cues from Tom Hanks‘ 1980s film ‘Big‘ and made a large budget superhero movie out of it, set in the universe of The Justice League. Everyone in the film looks to be having a great time on screen with their respective characters and it transfers to smiles and laughs in its audience.

The film follows a 14-year-old kid named Billy Batson (Asher Angel) who is an orphan who consistently runs away from his foster homes in search of his real mom. Billy ends up in Philadelphia in the care of a nice couple who are fostering five other kids, one of them being the handicapped Freddy (It’s Jack Dylan Grazer), who is a big superhero and comic book fan. Billy isn’t all that friendly though at first, especially when Freddy tries to be his new brother in the foster home. On a subway one night, Billy is transported to another dimension in and in from of a wizard who tells him the power of Shazam and that his soul is true and pure and that he must assume the powers to protect the world against evil, mainly the seven deadly sins in the form of demons from hell. All Billy has to do is utter the word “Shazam” and he instantly transforms into a muscle bound superhero, complete with cape and bright uniform and is now an adult (played by the amazing Zachary Levi).

This is where the “Big” situation hits the ground running and shows what every kid in the world dreams of – figuring out what super powers you have, which in Shazam’s case, is pretty much all of them. There are some excellent and laugh inducing scenes of Billy and Freddy figuring out by trial and error the many super powers he has now, which is done perfectly. There is even a wink to ‘Big‘ inside a toy store and big piano. Meanwhile, a man named Thaddeus Sivana (played by Mark Strong from ‘Kick-Ass‘), who we see his backstory in a series of flashbacks has assumed the powers of the seven deadly sins and seeks to destroy the world and of course Shazam.

David S. Sandberg tells this big superhero story with a bit of emotion in that we see Billy struggle with his lot in life and abandonment issues and realizing who is family really is and who his friends are, which he really never had before. On the other hand, Sandberg allows his horror roots out with the impressive looks of the demons representing the seven deadly sins, which remind me of charred cenobytes from the ‘Hellraiser‘ franchise. Zachary Levi looks like he his having the time of his life in the film playing a big buff superhero, but with the mentality of a 14 year old kid as evident in the scene when he and Freddy realize he has powers and the first thing they do when he is the big superhero is buy beer. It will make you laugh for sure. Mark Strong uses his physical presence and demeaning tone to perfectly pull of the villain, and Jack Dylan Grazer pulls off the fast-talking sidekick.

There are some pacing problems though here as the film runs over 130 minutes, but it could have been cut down to under two hours. In the second half of the film, it’s more or less only fight scenes between the same people, which becomes tiresome and redundant, which ultimately leads you to not care anymore. Still, there are some great surprises in store for you here, including two end credit sequences. The music of the film is fantastic and I look forward to more Shazam! on the big screen. 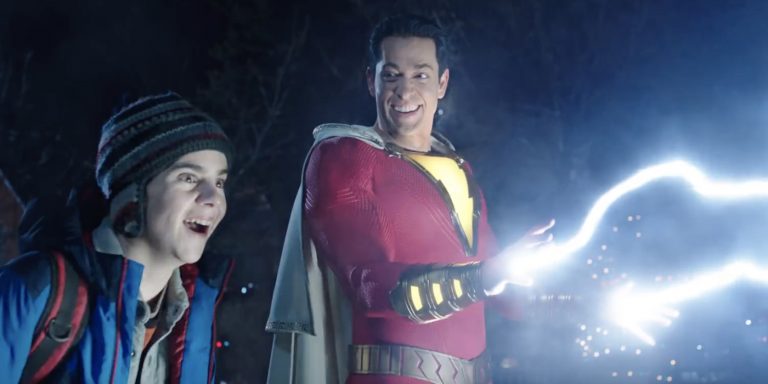 DC and Warner Bros. have had a certain visual style with their comic book movies. Dark, gloomy, and brooding could describe the tone and color palette of their films up until Aquaman was released. In that film, bolder and richer colors popped up with their intense underwater visual effects. With ‘Shazam!‘, the color palette is brighter as well, but it uses more practical effects than the intense CGI that Aquaman uses. From the 1080p Blu-ray version, this 2160p transfer with HDR10+ gives this disc a noticeable upgrade.

Primary colors are more robust in this 4K presentation in both wide shots and closeups. The red costume that Shazam! wears is more nuanced with its dark red color that perfectly contrasts well with the gold and yellow lightning bolt. The warm color that illuminates the lighting bolt is real and not CG, which looks outstanding. The neon lights that brighten up the strip club and carnival showdown eye-catching. Other warmer colors in the adoption house are fantastic all mixing well in lower light. The mall sequence showcases all the necessary variety of color spectrums from dark woods to bright white floors. The Shazam! lair gives a much colder look with varying shades of blues, greens, and grays, which all look fantastic. Black levels are dark and raven-like, which run deep in dark scenes and never give way to crush or murky sequences.

The detail is improved upon as well throughout. Again with Shazam’s costume, you can see the detailed stitching with symbols and markings all over it. Facial features reveal acne, stubble, individual hairs, and makeup effects nicely. The demons look excellent both in CG and practical work. Rocky formations in the wizard’s lair look very detailed as do the wonderful imperfections on all the rides at the carnival. It’s a well-rounded looking presentation here with wonderful colors, excellent detail and on major issues to speak of. 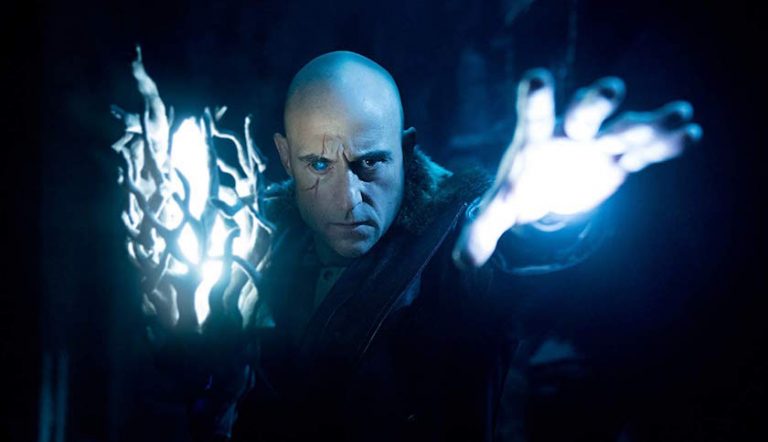 I wish everything came in a Dolby Atmos mix or at least had the option to listen to it. The way Dolby Atmos utilizes the smooth transitions of sounds from the speaker is out of this world and Shazam! is no different. Like the character himself, Shazam! is a kid, but when he dons the superhero costume, everything is bigger, better, and louder – just like the audio track. At first, the soundtrack is rather soft with polite dialogue that is clear and easy to follow along with, but when inside the laid or when Shazam! shows up, the Dolby Atmos turns things up to 11.

The sound effects of Shazam! flying through the air, big gun blasts, and magic spells appearing all are very loud and intricate. You can hear them travel through each speaker very well with excellent directionality. Height speakers show off a barrage of sound effects with a bus accident, rain, and a truck falling through the air. The demons also give way to these atmospheric sounds, which completely immerse you in this superhero world. The music and score always add to the comedic thrills of the film as well. There is a big low end of bass during action moments, which has a good rumble to it. This Dolby Atmos track is simply phenomenal.

There are some great extras included here, which are all on the Blu-ray Disc. Some good making-of featurettes, interviews with the cast and crew, on-set pranks and laughter, a ton of deleted scenes, and a motion comic are included. Unfortunately, there is no commentary track. There is about 100 minutes of bonus features to watch.

The Magical World of Shazam (HD, 27 Mins.) – This is a good look that is better than your average EPK that covers a ton of the filmmaking process. Cast and crew discuss the comic book, the character, bringing it to life on screen, the stunt work, visual effects, shooting on location, easter eggs, and rehearsal. There’s a lot to like here and is quite informative.

Super Fun Zac (HD, 3 Mins.) – A short look at the casting of Zachary Levi with his on-set pranks, laughter, and more.

Deleted Scenes (HD, 38 Mins.) – There are quite a few scenes here, including alternate scenes, and deleted ones that tell a little more to these characters. Some of them aren’t finished with the visual effects, but they are worth your while.

Who is Shazam? (HD, 6 Mins.) – The cast and crew discuss the personality traits and character of Shazam, along with his origins.

Carnival Scene Study (HD, 11 Mins.) – The big climactic fight at the end is the big focus here. We learn how it was set up, rehearsed, and shot. A lot went into making this scene.

Shazamily Values (HD, 6 Mins.) – This centers on the young kids of the film, working on a big superhero movie, and their friendship and experiences on set.

Superhero Hooky (HD, 4 Mins.) – This is a motion comic with the actors reprising their roles in audio form. It’s a good little story, which is more of a deleted scene, but the animation is just average at best with a motion comic. 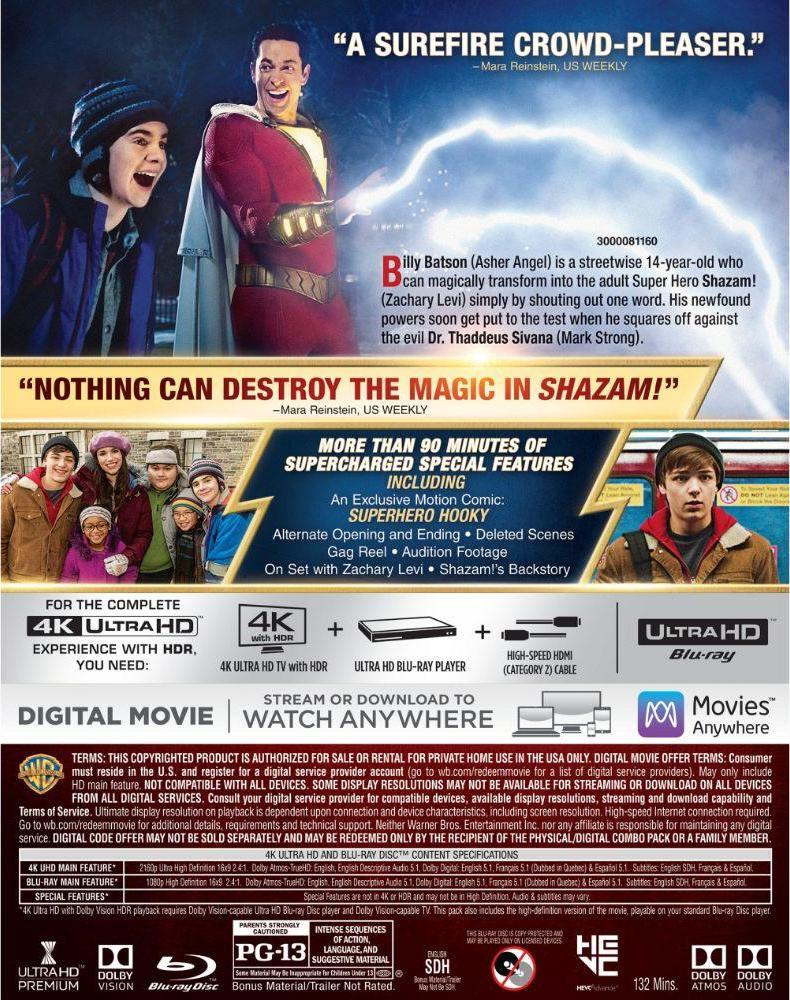 ‘Shazam!‘ is a big step in the right direction for DC and Warner Bros. It looks like both companies finally had a fun time making a movie that wasn’t all brooding and serious. This is a good balance of comedy and action that works well. The 4K UHD presentation is excellent with the added HDR10+ and the Dolby Atmos is wonderful. Bonus features are informative and fun too. This is HIGHLY RECOMMENDED!