Once Upon a Time…In Hollywood – Film Review!

“‘Once Upon a Time…In Hollywood’ is first-rate filmmaking and pure bliss for a movie fan.”

It’s always a special year when Quentin Tarantino releases a new feature film. His ninth movie is called ‘Once Upon a Time…In Hollywood‘ and is perhaps his most ambitious film to date. Not only has Tarantino grown as a filmmaker since 1992’s ‘Reservoir Dogs‘, permanently making Tarantino a household name, but his films have covered different time periods and genres too. Additionally, if you’ve seen Tarantino talk or be interviewed before, you can instantly tell he has a huge passion and love for older films and Hollywood itself. He’s a true fan and a wealth of knowledge about the movie industry and cinema. ‘Once Upon a Time…In Hollywood‘ translates that deep affection directly on screen too as we follow a struggling once-famous actor and his best friend stunt double around Hollywood for a few days. It’s a different breed of Tarantino, while at the same time, having all of the necessary Tarantino traits you come to expect when watching his movies. It’s wonderful to watch everything unfold for the nearly three-hour adventure that is given to us, which left me smiling and talking about it days after. ‘Once Upon a Time…In Hollywood‘ is first-rate filmmaking and pure bliss for a movie fan.

So by now, I’m sure you know that this film has something to do with the Charles Manson murders and Sharon Tate. That it does, but it’s a background item and plays perfectly in contrast to the two main ingredients of the film, which is actor Rick Dalton (Leo DiCaprio) and his stunt double/best friend Cliff Booth (Brad Pitt). The year is 1969, where Hollywood and the rest of the world was changing very fast. Rick Dalton, a famous actor known for his work in Western movies is struggling to get roles, because of the new long-haired hippies moving in. His long-time friend and stunt double Cliff is just happy to be working and living his solitary life in Southern California. Tarantino here has perfectly created 1969 Hollywood from the outside in with changing the Sunset Blvd and having his cast play iconic roles throughout the film, including a house party scene where Steve Mcqueen, Roman Polanski, Meryl Streep, and Cass Elliot show up to name a few.

Dalton’s agent and manager (played perfectly by Al Pacino) tells Dalton that he should go to Italy for six months and do several spaghetti westerns, in order to stay relevant. Dalton is not happy about this and has a severe drinking problem. He’s depressed and is more or less an all-around diva, still trying to be an A-list actor. Seeing DiCaprio own this role is simply outstanding. He’s funny, wonderful, and perfect all at the same time. In a sequence, we see DiCaprio have a full-on meltdown in his trailer, but then turn on the charm in the next scene, which an 8-year co-star tells him that’s the best acting she’s ever seen, which causes him to cry. It works on so many levels and gets a belly laugh. 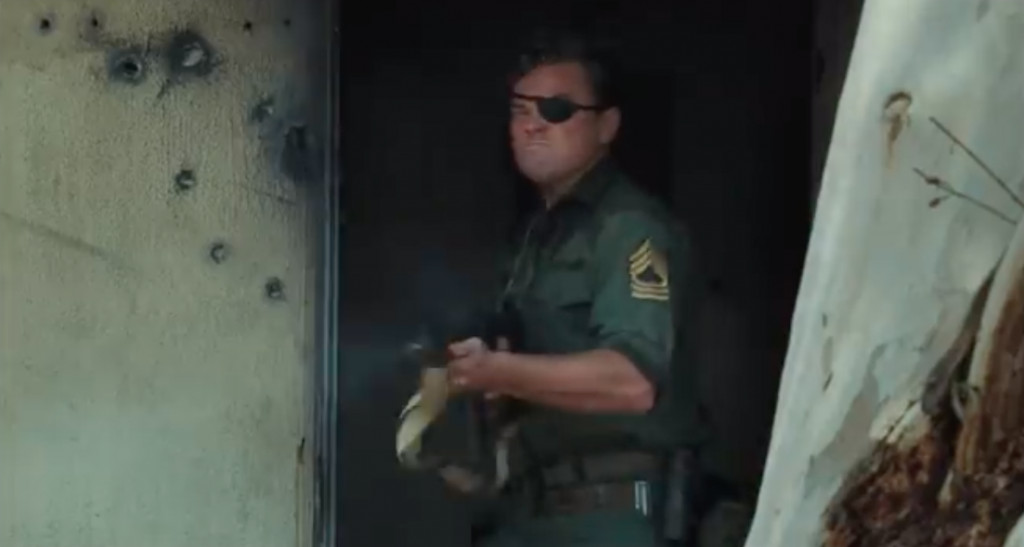 Meanwhile, we get small glimpses of the beautiful and cheerful Sharon Tate (Margot Robbie), enjoying life in Hollywood in 1969. From interviews in the past, anyone that knew Tate has said that she was the light of this world and completely genuine and happy. She put a smile on everyone’s face where ever she was. Tarantino captures this ray of sunshine in each scene she is in, particularly when Tate goes to a newly released movie she’s in at the theater and can’t stop smiling at herself in the movie and the reaction it draws from other moviegoers. Tarantino shows this for two reasons. One is that it perfectly contrasts from Dalton’s unsavory character and the other is to foreshadow what we know is eventually coming.

Tarantino has superbly crafted these little moments of Hollywood that we’ve always heard about and have now become a legend. It’s this fantastic fairy tale that was real life and it’s just magical to see play out on screen. From Bruce Lee practicing his moves on set, to actor meltdowns, to life on the Charles Manson ranch, to even just cruising the Sunset Strip. It’s really perfect and Tarantino has even made mini-movies for the character Rick Dalton that I hope we get to see at some point in full. I have no doubt Pitt and DiCaprio will receive all the awards for this, and they truly deserve it. They go above and beyond here both physically and mentally. And plus, if you ever want to see Brad Pitt high on acid, nows your chance. ‘Once Upon a Time…In Hollywood‘ is something to cherish.