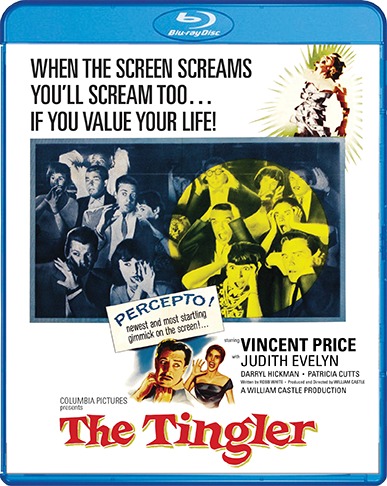 Gimmicks used to be a huge thing in horror movies back in the 1950s. They were used all the time in these low budget horror films to conjure up scares, word-of-mouth, and good publicity to sell a movie that wasn’t necessarily any good. In 1959, filmmaker William Castle (House on Haunted Hill, 13 Ghosts) was a pioneer in using these gimmicks. He was known for paying actors to attend movie screenings and scream and or faint during the film to cause a stir. In House on Haunted Hill, Castle rigged a fake skeleton to fly through actual movie theaters to scare the audience. He was a genius for sure, way ahead of his time. In 1959 though, he made a film called ‘The Tingler‘, which starred Vincent Price. His gimmick for this film was to use some of the budget to attach buzzers to theater seats to simulate scares and screams at certain moments in the movie. It worked perfectly and this is the type of movie where this gimmick succeeds.

‘The Tingler’ follows a doctor (played by Vincent Price), who discovers that everyone has a centipede-like parasite attached to the bottom of their spine. When in fear, this parasite does its bidding until it kills you unless you release a scream. One of these parasites gets loose into a crowded movie theater and wreaks havoc on a ton of people, however, there is a murder mystery involved too, involving a supernatural mute/deaf woman. It’s still a fun film some 60 years later. The video presentation and audio mix from Scream Factory are excellent and there are some good bonus features to boot as well, which are listed all out below.

In The Tingler, Vincent Price stars as an obsessed doctor who discovers a parasitic creature which grows on the spinal cords of terrified people. If they scream, the Tingler can be destroyed. If they don’t, it will sever the spinal column and kill them. He successfully isolates and removes the Tingler from a deaf-mute (Judith Evelyn) who has been scared to death by her devious husband. Once captured, the Tingler escapes and runs amok in a crowded movie theater. Terror is loose, but can it be stopped?
The Tingler is legendary horror director William Castle’s magnum opus. After the success of House On Haunted Hill, Castle devised a new gimmick called “Percepto.” Participating theaters would wire seats so that random moviegoers would get a tangible electric shock during climactic moments in the film. Another novelty used to maximum effect is the short color sequence depicting blood pouring from a faucet and filling a bathtub. Castle went on to direct more cult classics like Homicidal and 13 Ghosts and later produced the mainstream hit Rosemary’s Baby.
The Tingler Bonus Features