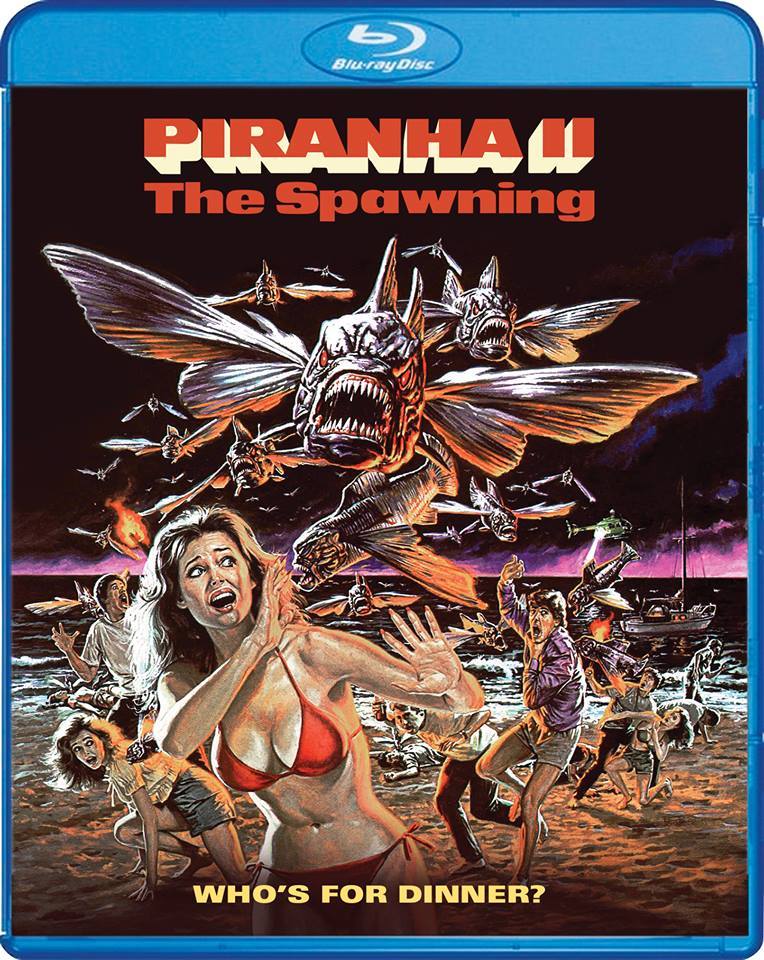 Back in 1981, the world was introduced to filmmaker James Cameron (T2: Judgement Day, Avatar, True Lies). His first feature film was called ‘Piranha II: The Spawning‘ or otherwise known as The Flying Killers and was a sequel to the first ‘Piranha‘ film from a few years prior. The production of this movie had a very troubled history, where Cameron wasn’t even the filmmaker hired for the job. The original director was fired due to differences with the hard-nosed Italian producer. This was also true with Cameron as well, where Cameron had a completely different filmed version and script of the movie that was more or less a comedy horror film that was fun.

The producer though wanted a more serious (if that could be possible) tone and basically only had Cameron shoot the film. Cameron had no creative input, editing, or ideas that were put into motion. There is  Cameron cut of this film somewhere out there, but it’s rarely seen. What we have today through Scream Factory is the producer’s cut which has no real rhyme or reason. It takes place on an island where there are tourists, families, scuba classes, girls in bikinis, and couples making love in and around the beach, while Lance Henricksen is playing cops and robbers. All of this is cut short due to some killer fish who have learned to fly and end up killing people around the beach.

Nothing more and nothing less is shown or expected. All we get to do is sit back, relax, drink a cold one, and enjoy the laughter and absurdity of it all while realizing that one of the biggest filmmakers of all time started here. Scream Factory gives us a fantastic video and audio presentation with some new bonus features to boot, which are detailed below. Recommended or sure.

While investigating the mysterious death of a diver, scuba instructor Anne Kimbrough (Tricia O’Neil – Titanic) makes a horrific discovery: Piranha-like fish, with wings that enable them to fly, are responsible for the death. As the body count rises, Anne desperately tries to convince the manager of the Club Elysium resort to call off the annual fish fry on the beach, but he’s determined to give his guests the ultimate feeding frenzy. This exciting sequel to Joe Dante’s original PIRANHA also stars Lance Henriksen (Aliens, Pumpkinhead) and is the directorial debut of James Cameron (Avatar, The Terminator, Aliens).
Special Features: