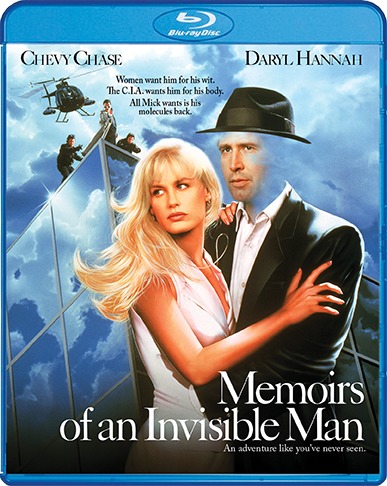 John Carpenter is mostly known as a maestro of horror with movies like ‘Halloween‘, ‘They Live‘, ‘Escape From New York‘, and ‘Big Trouble In Little China‘ under his belt. In 1992, a mostly forgotten movie he made is ‘Memoirs of an Invisible Man‘, which starred Chevy Chase, Daryl Hannah, Sam Neill, Michael McKean, and Stephen “Ned Ryerson” Tobolowsky. Carpenter and Warner Bros. Studios didn’t exactly get along, because they wouldn’t let Carpenter have total creative control here, so the film is safe and family friendly, unlike the rest of his films. In fact, Ivan Reitman of ‘Ghostbusters‘ was set to make this movie, but it never got off the ground and Carpenter was offered the role.

The film follows a guy named Nick (Chevy Chase), who is a stock analyst who in a superhero-like turn of events, is transformed into the invisible man. The CIA finds out about him and wants to recruit him as a super spy, but he wants no part in it and is on the run from just about everyone in hopes to find a doctor who can reverse his issue. It’s a solid movie and is an anomaly on both Chase and Carpenter’s film resume. This is kind of a family-friendly sci-fi comedy for Carpenter, where this is perhaps the most serious role Chevy Chase took on and he nails it. It still holds up to this day and should be seen. In fact, this film was super rare and out-of-print for the longest time until now. All the more reason to get this one from Scream Factory. The new video and audio presentations are good and there are some vintage bonus features as well, but no new ones. Still, this comes recommended.

Chevy Chase takes center stage in 1992’s Memoirs of an Invisible Man. Thanks to a nuclear accident, Nick Halloway (Chase) has become invisible. Invisibility makes it easier to spy on agents (particularly chief adversary Sam Neill) who’ve put him in his predicament. And he can romance a lovely documentary producer (Daryl Hannah) in a way she’s never “seen” before. John Carpenter directs and Industrial Light and Magic create eye-opening effects as Nick embarks on his manic quest.
Memoirs of an Invisible Man Special Features