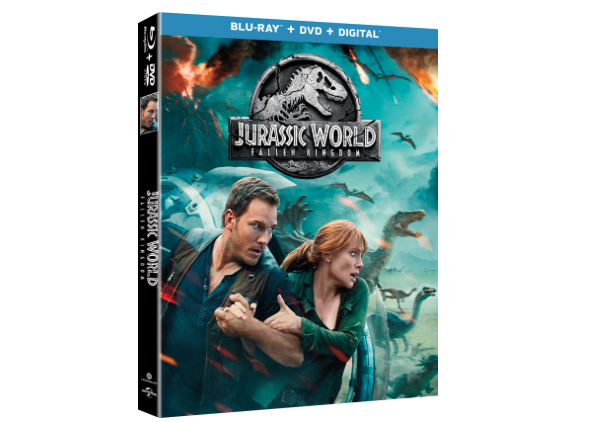 ‘Jurassic World‘ burst onto the scene as a sequel/reboot hybrid film that made over $1.6 billion at the box office. Of course, there would be more, but at what cost? ‘Jurassic World: Fallen Kingdom‘ takes place a year or so after the events of the first film where the island where the theme park and dinosaurs were on are ravaged by an exploding volcano. Chris Pratt and Bryce Dallas Howard team up again to save the dinosaurs, however they are misled by a maniacal businessman who has other plans for the dinosaurs, mostly being selling them at an auction to warlords across the country in hopes of turning these dinosaurs into military killing machines with freaking lasers attached to their heads for a profit. I’m not making this up.

The screenplay and story seems like it was made by 10-year-old kid where none of it makes sense. It’s not even a fun movie. in fact, it’s a sour, gloomy, and death filled motion picture that’s not quite suitable for kids. It’s a weird direction they went here, none of it is worth your time, besides the visual effects, which are top notch on every level here. The video and audio presentations are demo worthy, 5-star elements to this Blu-ray release. It’s exactly what you want with this type of film and it exceeds expectations in every way. There are a ton of short bonus features, which are listed below as well. I just wish the film was better.

In ‘Jurassic World: Fallen Kingdom‘ directed by J.A. Bayona (The Impossible, The Orphanage) and executive-produced by Jurassic titans Steven Spielberg and Colin Trevorrow, Owen (Pratt) and Claire (Howard) return to Isla Nublar three years after the destruction of the Jurassic World theme park to rescue any remaining dinosaurs on the island from a catastrophic volcano that threatens to leave dinosaurs extinct once again. Owen is driven to save his lead raptor, Blue, while Claire makes it her mission to preserve the creatures that she has grown to deeply respect. When the lava begins to rain down, they soon discover terrifying new breeds of ferocious dinosaurs along with a conspiracy that could threaten the entire world. Joined by co-stars James Cromwell (Babe, The Green Mile) as wealthy entrepreneur Benjamin Lockwood, Dr. John Hammond’s partner in creating Jurassic Park, as well as Justice Smith (The Get Down) and Daniella Pineda (The Detour) as Franklin Webb and Zia Rodriguez, members of Claire’s Dinosaur Protection Group; this brilliant cast brings an extraordinary story to life as chaos erupts when Owen, Claire, and their team discover a most deadly endgame that could bring the planet back to prehistoric times.