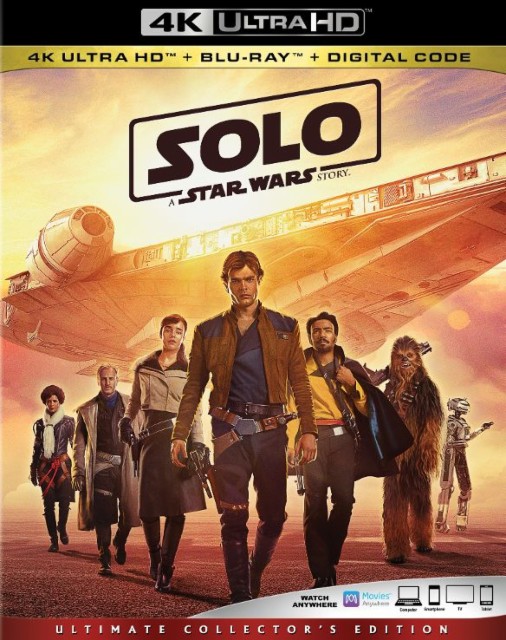 Disney is on a roll these days with their recent ‘Star Wars‘ franchise. Not only do we have the new Episodes, but we are getting spin-off movies that focus on a singular story from the past or a certain character. One character that we all have loved from the original trilogy, but don’t know a great deal about is Han Solo. Sure, we know he was a smuggler, is an anti-hero, loved the princess, and helped save the Galaxy with his wookie partner Chewbacca, as they flew from planet to planet on the iconic Millennium Falcon. Through the original trilogy, we heard small lines of dialogue that gave us the tiniest glimpse at his background and life before he met Obi-Wan and Luke. Fortunately, we now have ‘Solo: A Star Wars Story‘ to answer all of those questions for us.

The 4K UHD transfer is good, however, the movie is so darkly lit and gloomy that detail and colors suffer. Additionally, the visual depth of the image just isn’t there, making for a flat image. It’s the least striking ‘Star Wars‘ movie out there – visually speaking. On the other hand, the Dolby Atmos audio mix is outstanding and comes full of bass, surround noises, and height sound effects. It was a blast, to say the least.

Sit down with director Ron Howard and the stars for an intimate and entertaining discussion of the film’s making.

See what it takes to bring your favorite Wookiee to life in this lighthearted look behind the scenes.

Get behind the wheel for the making of this high-octane chase through the streets of Corellia.

Explore the challenges and thrills of creating this action-packed sequence, including its remote location and spectacular effects.

Meet the newest droid—and the talented actor who helps bring her to life.

Take an in-depth tour of the rough-and-tumble bar where strangers mix and gamblers risk all in the legendary card game, Sabaac.

Join Han and Chewie at the controls of the Millennium Falcon to see how this legendary moment in Star Warshistory unfolds.