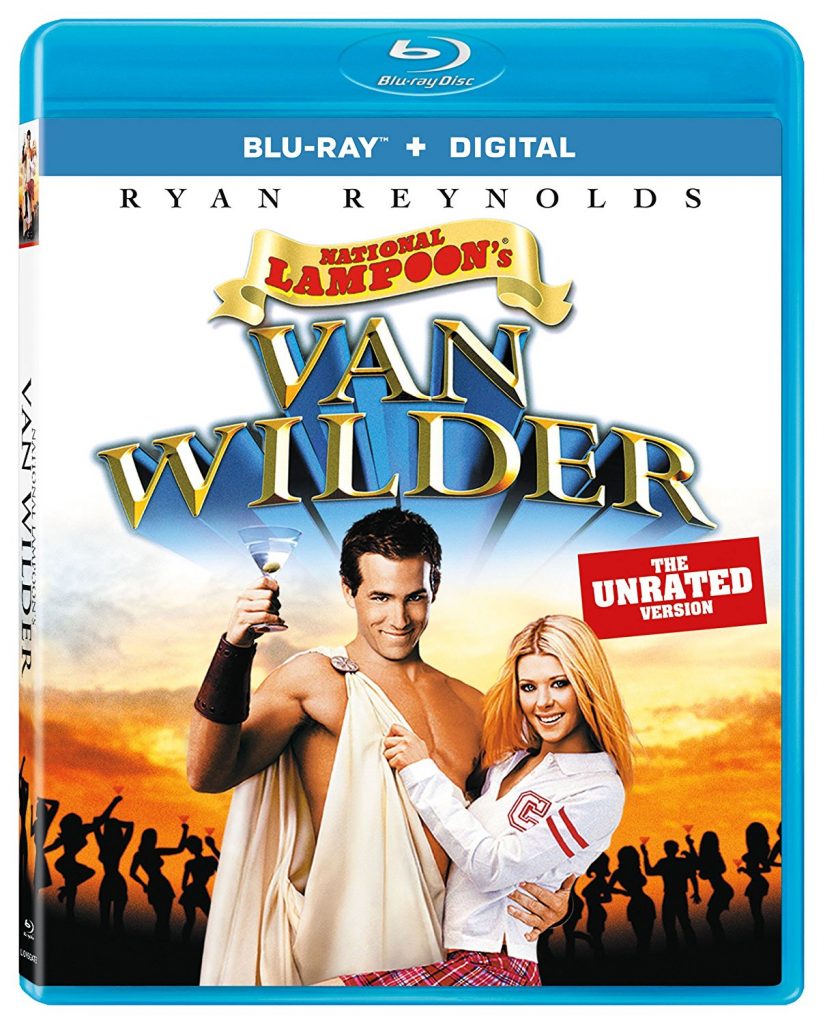 ‘National Lampoon’s Van Wilder‘ came out sixteen years ago and more or less re-lit the fire for National Lampoon. This also paved the way for Deadpool himself Ryan Reynolds, as this was his first feature film in a leading role. Some of the jokes don’t hit too well in our current politically correct culture, but it’s silly enough to have fun with it. It’s just unfortunate that the filmmakers went the gross-out humor route solely and failed to develop these good characters, but that seemed to be the case in 2002. Also, it’s unfortunate that this is not a new remaster or transfer. This is the same video and audio presentations from the 2007 Blu-ray release, which of course had its problems. I imagine Lionsgate is trying to make a quick and easy dollar for the release of ‘Deadpool 2‘, hence this re-release that has no new extras on it. Still, if you’re a fan of the film and want the Digital Copy, this is a way to get it.

After a couple of decades of not living up to the hype of ‘Animal House‘, National Lampoon went back to college with ‘Van Wilder‘ in 2002, that starred a young Ryan Reynolds that launched his career into superstardom. The film was a minor financial success, despite being panned by critics, but loved by almost everyone else, which led to at least two sequel/prequels movies. Revisiting ‘Van Wilder‘ sixteen years later, the film is still funny in moments, but in our PC culture, some of the jokes wouldn’t land as well as they did in 2002.

What’s great though is seeing Reynolds lead his first film with his excellent comedic timing and delivery, along with his charm and wit that eventually led him to ‘Deadpool‘. Despite Reynolds’ performance, his character in the film isn’t really fleshed out, which is unfortunate, because the character of Van Wilder is much more than meets the eye. Even though he loves to party and wants to stay in college for a decade, he is a genuine guy who wants to help the underdog in all cases. This is never explored really in the film, but it’s rather just one gross-out joke to the next, which for a 2002 film, was the standard raunchy comedy formula.

The story follows a seventh year college student who just doesn’t want to graduate. Why would he though? He has a ton of money from his father (Tim Matheson from Animal House), tons of women who love him, great friends, and a personal assistant from newcomer at the time Kal Penn (Harold and Kumar), who plays a foreign exchange student from India with all of the insane stereotypes that go with it. Wilder’s father cuts him off, forcing Van to have to pay for his tuition for himself, which sets off a string of business ideas for Van to make money, including party planning and topless tutors.

Meanwhile, a journalism student named Gwen (Tara Reid) begins to write a series of articles on Van for the university paper and asks the question, “Why stay in school so long?” This leads Van to question if he finally wants to grow up and enter the real world. There is a lot of great themes here to explore, but again, it’s all about the toilet humor that comes with every body secretion splashing on screen. If this film were to be released today, I’d imagine some folks would definitely be offended, however it’s just so silly, that it’s hard not to laugh at it.

The story and direction is atrocious for the most part, but it’s with Reynolds’ performance that makes ‘Van Wilder‘ hold up with all its flaws to this day. Some sixteen years later, it’s great to see how far Ryan Reynolds has come as an actor, and also witness his great charm and comedy on screen when he first started. It’s no doubt that he is a big star today. Also, keep a watch out for cameos from now A-list actors, such as a young Aaron Paul from ‘Breaking Bad‘.

Unfortunately, this is the same video presentation from the 2007 Blu-ray release. However, watching this on a 4K Television along with a 4K player, slightly improved the image. Still, this is one film that could have benefitted from a big transfer overhaul. In all, detail is rather soft and colors aren’t as bright and vibrant as they could have been. This still looks like the image was taken from the DVD copy of the film and slightly enhanced.

This release comes with the same 7.1 mix from the previous 2007 Blu-ray release, which is interesting, because there really isn’t anything that warrants the 7.1 mix with the exception of a few party scenes. Still, this is far better than the above video presentation. Still, the 7.1 audio mix does a decent job with dialogue and surround activity, mostly being at parties and other venues that have a ton of other college students at. That being said, there isn’t much here that warrants a spectacular audio mix.

There are no new extras whatsoever here.

Drunken Idiot Kommentary – Yes, spelled with a K, this commentary track doesn’t feature any of the actors or filmmakers of the movie, but rather a group of random people talking about the film while watching it. It’s awful.

Party Legends, Pledges, and Bullies (HD, 16 Mins.) – A super long promo fluff piece with talking head interviews with the cast and crew, talking about making the movie. Most of this is just clips from the film with sporadic interviews with nothing of value being said.

Ultimate College Party Guide (HD, 5 Mins.) – One of the characters from the film talks about how Van Wilder takes to his party planning.

Gwen-ezuma’s Revenge (HD, 8 Mins.) – This talks about how laxatives work, which is part of the movie of course.

Testicles of the Animal Kingdom (HD) – A multiple choice interactive quiz that prompts you to pick which testicles belong to which animal.

Write That Down (HD) – Quotes from the film are written on the screen.

Blu-Book Exam (HD) – You’ll watch a clip from the film and then this feature asks you a question about it. Can you get it right?

Deleted Scenes (HD, 9 Mins.) – There are a total of nine deleted scenes here, all of which are worth your time.

Burly TV Specials (HD, 44 Mins.) – There are three episodes of other TV shows that featured press days of Van Wilder. They all can be seen here.

Comedy Central’s Reel Comedy (HD, 21 Mins.) – Like the Burly TV Specials above, this is another TV show that talks about the release of Van Wilder on Comedy Central.

‘National Lampoon’s Van Wilder’ still packs some silly laughs sixteen years later, however there are quite a bit of jokes that don’t stick the landing in our current PC climate. It’s great to see Ryan Reynolds hold his own here as this was his first leading role, which you’ll be able to see why he is the star he is today. Other than that, the film is just full of gross-out humor for the sake of being funny, which doesn’t always work well. The video and audio presentations are the same as the Blu-ray release from more than a decade ago and there are no new extras either. It would have been nice to see Reynolds come back for a brand new commentary track. Again, the only thing I can see different about this release is the slightly different packaging and the inclusion of a Digital Copy. If it’s cheap enough and you’re a fan of the film, you’ll want this.