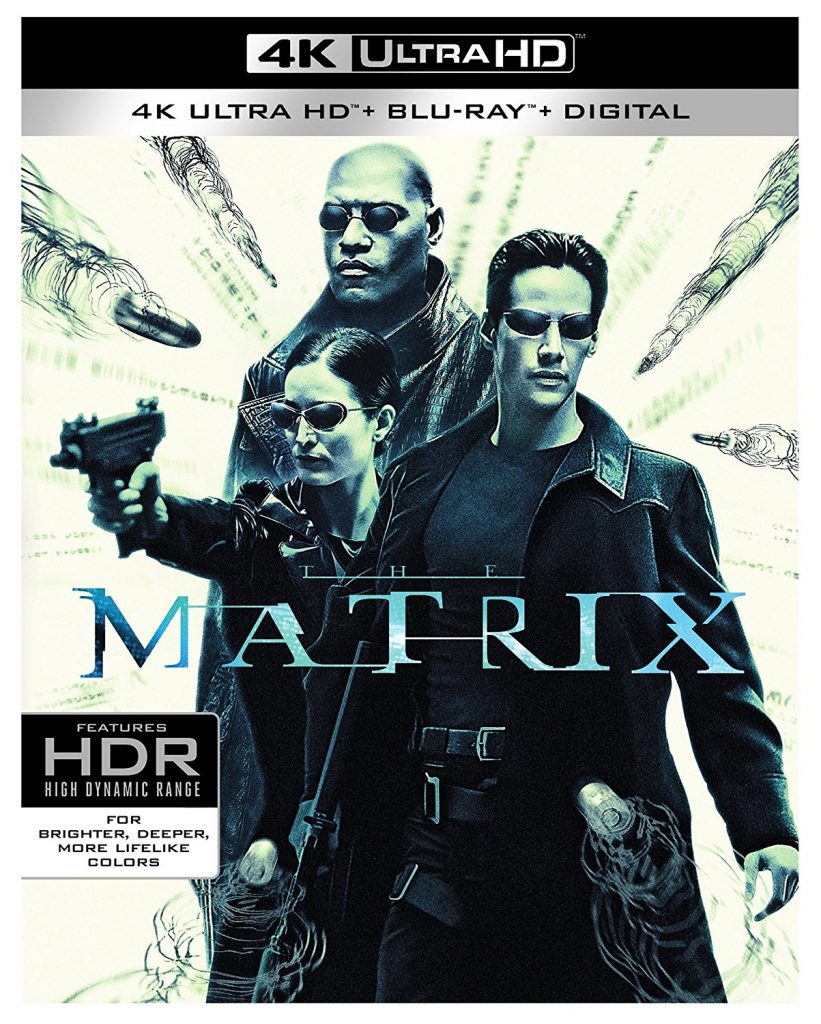 There are only a handful of times where a single film completely flips the entire cinema world upside down and becomes the landmark and milestone for future movies and filmmakers in the decades to come. In 1999, the filmscape was forever changed with a sci-fi action movie called ‘The Matrix‘ by the Wachowski siblings. Nobody had ever heard of the filmmaking duo before and there was not a single soul in the world that though Keanu Reeves would become the action star he became after this movie, but it all worked out well and drove a ton of creative people to think, philosophize, and create even more work based on ‘The Matrix‘.

This film came out when the internet was new to a lot of people, and computer hacking, robots, artificial intelligence seemed somewhat foreign. Times have definitely changed since then, but ‘The Matrix‘ still holds up almost 20 years later and continues to be the forefront of the science fiction genre, as well as how action movies are choreographed to this day. In the film, we follow a guy named Thomas Anderson, who works a desk job by day, but is a hacker for hire by night. Soon enough, Thomas finds himself in some deep trouble, but realizes that the world around him is a digitized image by futuristic robots known as ‘The Matrix‘.

Once awaken in the “real world”, he sees that there only a few humans left and he might just be the chosen one to lead a rebel army against the robots to save humankind. No one paper, that synopsis reads like a heavy set B-Movie with no real sense of quality that could easily be laughed at. That’s not the case at all though here, as the Wachowskis have flawlessly delivered an excellent story with high levels of character development, background, origins, along with brand new at the time fight choreography that is still replicated today. There have been books written about this movie and the philosophies that surround the story, not to mention it’s two big sequels and short films that this has spawned.

There is a ton of superhero and even Superman symbolism in the film, along with a satire on US culture, politics and society. Never has this sort of undertaking been done before this movie and it certainly has never been able to be remade or rebooted either – yet. ‘The Matrix‘ is one of those movies that not only gives you a ton of cool action scenes, but also forces you to think outside the box or in this case, “follow the white rabbit” on multiple occasions. It’s one of those movies that will be remembered forever.

The Video: I didn’t think it was possible to have ‘The Matrix‘ look any better than it has on previous Blu-rays or DVDs, but Warner Bros. has given this two decade old film the royal treatment in 4K UHD with Dolby Vision and HDR10. The new 4K transfer was supervised by Bill Pope and Jan Yarbrough from the original films and is a new scan from the original camera negative. The result is that this is the best ‘The Matrix‘ has ever looked. You can tell that Warner Bros. took their time with this release and let’s hope they give us the two sequels soon with this much love.

Their are two different worlds when watching ‘The Matrix‘, with two very different visual presentations. There is the real world, which is dark, dreary, dirty, and full of blue-ish grays. Then there is the ‘Matrix’ world, which is the fake data world, that is cleaner and full of green tints, much like that of a computer monitor inputing data. This is also where the bright and bold colors tend to stand out. This new transfer completely enhances both worlds with tons of nuanced and layered greens and blues, where you’ll be able to differentiate the shading in many different scenes. This was not possible before on prior releases, but here, it just opens up the entire visual landscape.

When looking at ‘The Matrix’ scenes, you’ll notice more greens and even more primary colors than there were before. It’s all more intricate. Now when in the real world, you’ll see better hues of blues and other dark reds or even slimy pinks with little hints of green. It really is a flawless video presentation with colors. That Dolby Vision certainly upgrades the black levels in every scene, which are super inky and deep without any crush. The exterior shots in the ‘Matrix’ world showcase brighter primary colors, but also show that greenish tint better with the Dolby Vision. It’s remarkable.

Detail now is highly sharp and vivid, showcasing every visible skin pore, scar, individual hair or stubble on the actor’s faces. It’s simply amazing. The shoddiness of the spaceship shows every dent, scuff mark, and dirty wall greatly too. The heavy CGI sequences never go soft either, but are enhanced to a great degree. Wide shots keep sharp as well. This is the video presentation we’ve always wanted here.

The Audio: Finally, we have a Dolby Atmos track with ‘The Matrix‘, which might be the best audio design ever for a film. It actually won a ton of awards for sound. We finally get the height audio we’ve been wanting since day one here and it sounds fantastic. The sound effects are enhanced with tons of layering and better directionality. The scene where Neo dodges the bullets in real time are far more upgraded and travel greater distances in the directions they are flying.

There is no new directionality here, but instead every sound effects has an added dynamic that makes it sound fuller. The helicopter scene where Morpheus is rescued adds to the wind effects and blade rotation above as it rains down upon him. This is fully immersive and fantastic. The big gun and bullet sequence in the building lobby might be the best action scene, audio-wise that you’ll see now. Every direction of  each bullet can be heard with the proper balancing and dynamics.

The added screams, bullet casings falling out onto the ground, and other kicks and punches all make for a fully immersive soundtrack that never disappoints. The score and song list always add to the intense situations and futuristic world as well. The bass is heavy in a great way and always adds the depth element to each scene. The dialogue is always crystal clear and easy to follow, and free of any pops, cracks, hiss, and shrills. This is one of the best Dolby Atmos tracks out there. 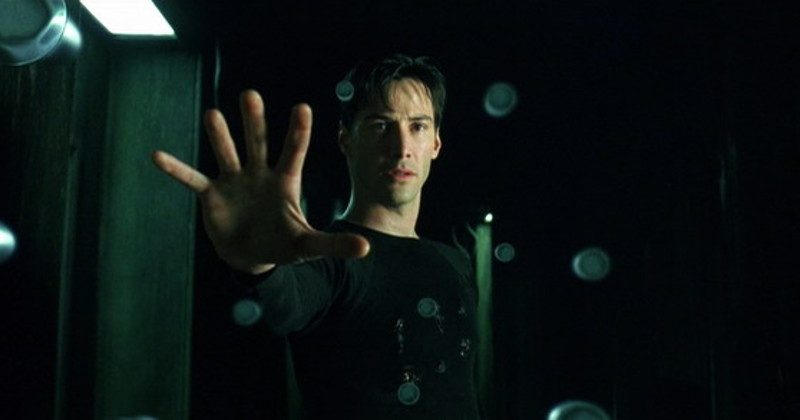 ‘The Matrix‘ has seen its share of multiple releases on many formats over the years. I know I have purchased this movie many times over, but it looks like most if not all extras from the previous releases have been imported here on the 4K UHD Disc.

Commentaries – There are several different commentary tracks here. First, there is a written introduction by the Wachowskis, followed by options of commentary tracks, including Philosopher Commentary by Dr. Cornel West and Ken Wilber, Film Critic Commentary by Todd McCarthy, John Powers, and David Thomson, Cast and Crew Commentary (sans Keanu Reeves), and a composer commentary track by Don Davis, along with a music only option to select. All of these are worth your time to listen.

In Movie Experience – While watching the movie, you can listen to the commentary and watch pop up videos on the making of the film.

Behind the Story (HD, 216 Mins.) – Yes that reads 216 minutes in total, but it is split up amongst a ton of bonus features. There is a two hour documentary on the making of the film called The Matrix Revisited, along with several sections that discuss the unique fight choreography, philosophy of the movie and more. In addition to that, some of the movie’s key scenes are deconstructed and discussed here. Lastly, the visual effects are talked about and how they were used with the new cameras and shooting style.

The Music (HD, 197 Mins.) – There is a Marilyn Manson music video from the film along with a giant 41 song play list of all the score and music from the film that can be played. Wow.

Trailers (HD, 8 Mins.) – A collection of trailers and TV spots for the film. 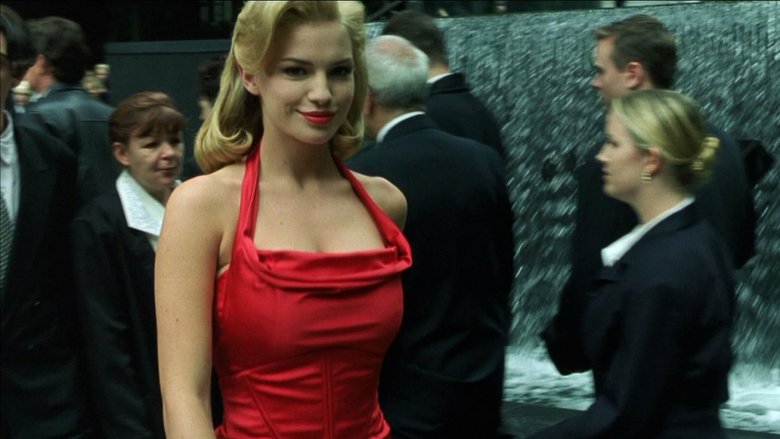 Warner Bros. has definitely taken their time and showed a ton of love for ‘The Matrix‘ over the years. With the 4K UHD version here, that has not stopped, because the new 4K transfer and brand new Dolby Atmos sound option, ‘The Matrix’ is better than ever and still holds up after all this time. Additionally, most of the bonus features from the previous releases have been imported over to this 4K UHD release that includes over six hours of material, not including the multiple commentary tracks. This release is a MUST-OWN!