I’m gonna take a shot in the dark and say that Graham Skipper watched a lot of horror movies in the 80’s and played “tempest” at the arcades one too many times.  And good for him.  The end result of years of B movie horror and old school cabinet games led to his writing, directing, and producing of “Sequence Break.”

Long story short, this is a low budget sci-fi quasi-psychological horror about “Oz,” your friendly neighborhood arcade repair guy, and a beautiful girl who definitely has no reason to talk to him, but of course she does anyway.  What follows can only be described as an illogical romance story mixed with a supernatural arcade machine. 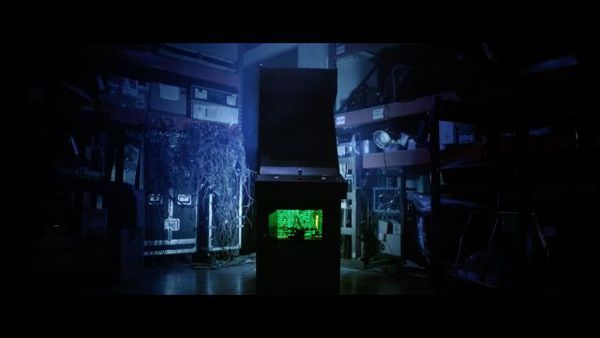 I think this is all meant to be a metaphor about how easy it is for us geeks to immerse ourselves in and, in a quite literal sense, love technology too much.  And when I say “literal,” I really mean it.  This guy basically finger bangs an arcade game.  There’s just no other way to say it.  As fun as that scene is, anyways, the movie itself is superficial at best.

The plot, and the somewhat disappointing finale, don’t make much sense other than haunted arcade machine devours beautiful woman and you have to save her, but there’s some cool things to see on this trip.  Graham Skipper definitely saw “Scanners” and “Re-Animator” one too many times as a child, mimicking some of the old school special effects in some acid influenced visuals.  Although it’s some fun eye candy for a little bit, it doesn’t ever really pack the punch it intended.

Perhaps the biggest flaw of the film is that it falls under it’s own low budget ambition.  Shot with some sort of HD cameras, the subject matter itself would have been better served by older technology and maybe some film grain.  So basically, this film may have benefited from being even lower budget.  The acting never feels natural, and perhaps it could have cut down on the plot development.  At a very odd run time of 80 minutes, it comes just too short of being a true feature film and just too long to be a tv episode.

It’s an experience that will play well in festivals, but it is unlikely to capture much of a tv audience.  All that stated, as a little work of art paying homage to our memories, it shows some strong potential.  Not one to be totally discounted, but it’s much like actually going back and playing asteroids; you quickly realize that the nostalgia is more valuable as a memory than as a current experience.