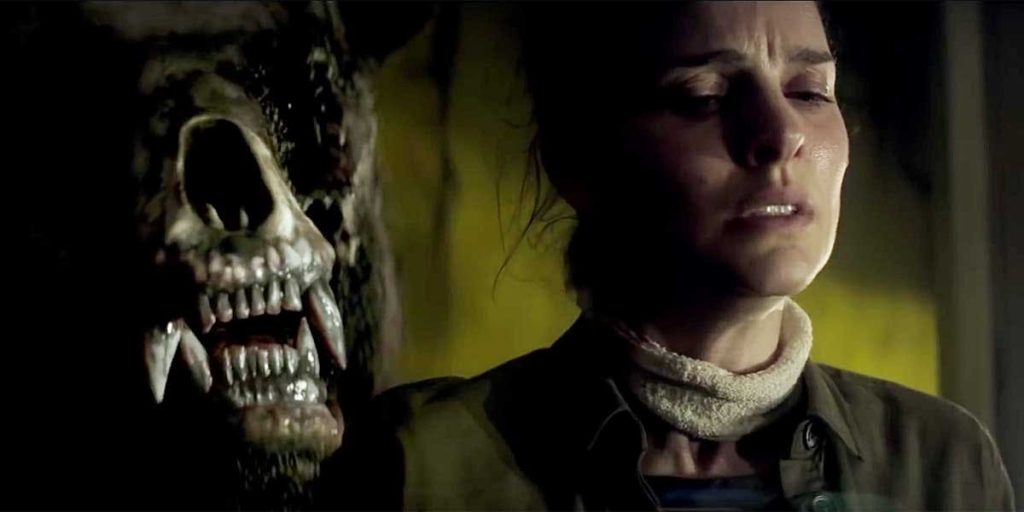 Adapted screenplays are common these days as more studios seek out novelists for material inspiration. In the latest visual reworking, Director Alex Garland, who modernized artificial intelligence and gave us the ingenious ‘Ex Machina,’ shares his dexterity for the science fiction genre once again with ‘Annihilation.’ The film plants you into the surreal world of Jeff Vander Meer’s unique imagination; a place that is both cosmic and disconcerting. This biosphere venture is a daring and elegant investigation of impossibilities. Its complexity and terror-inducing thrills will not only cause cold sweats, but leave viewers mystified at the end of a strange trip.

Defeated by the disappearance of her husband, Sgt. Kane (Oscar Isaac), Biologist Lena (Natalie Portman) concentrates on her work as a professor after accepting he’s been killed in action. When he shows up disoriented and aloof at their home a year later, unable (or unwilling) to answer her inquiries about his whereabouts, Lena is wary. And almost as suddenly as he appears, Kane is whisked away in an ambulance after falling catatonically ill.

The couple doesn’t make it far when the vehicle is ambushed by military personnel, and an emotionally distraught Lena is dragged, sedated and transported to a top secret location for questioning. Once there, it’s revealed that Kane is the sole survivor from his unit to emerge from the ‘shimmer’, a rapidly expanding dome around a lighthouse. Feeling an obligation to save her husband, Lena bravely volunteers with a group of other experts (Gina Rodriguez, Jennifer Jason Leigh, Tessa Thompson & Tuva Novotny ) to try and find out what’s behind this unforgiving curtain.

‘Annihilation‘ rejects the rules of what a sci-fi picture has categorically been and blurs the lines of fantasy and horror in an exhilarating way. The atmosphere and mutated imagery of plants and animals is absolutely stellar. If nothing else, the film is a visual playground and nightmare for the senses. Forget what you may think about the peaceful appearance of flora, because ‘Annihilation‘ proves that nature can be scary. And perhaps the most refreshing of all, this film casts a dynamic group of female-driven heroins that feel authentic, because they don’t submit to the typical tough-male stereotype.

‘Annihilation‘ will shock, awe and torment. Be prepared and open for a studious and uncharted leap into the unapologetically weird. If you can embrace unanswered questions and multifaceted themes, this is another level of haunting and powerful cinema!