‘Flight of the Conchords’ are coming back to HBO! 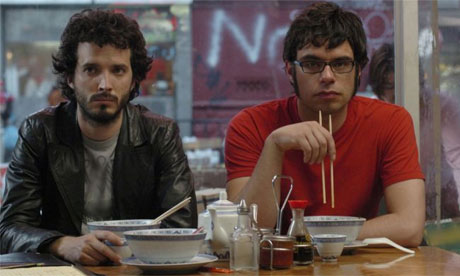 In the daytime of the night, Bret McKenzie and Jemaine Clement, who make up the duo that is the hilarious ‘Flight of the Conchords‘ are coming back to HBO for a one-hour special of music and comedy later this year. The comedic pair will perform new and old songs on their upcoming comedy tour, which will be filmed in front of a sold out audience in the UK. This is just excellent news and I hope the two will have future specials and even a new show after the success of this upcoming one. I wonder if there will be a new Bowie song or a sequel to ‘Business Time’. I hope so.

New Zealanders McKenzie and Clement debuted on HBO in 2005 in an edition of the comedy series “One-Night Stand,” returning to the network in 2007 for the debut season of the series “Flight of the Conchords,” which followed fictionalized versions of their lives in New York City. The show was praised by critics and beloved by fans, turning the cult favorites into an international sensation. “Flight of the Conchords” earned ten Emmy® nominations over its two-season run on HBO, while their album “The Distant Future” won Best Comedy Album at the 2008 Grammy Awards.